Markets have been taking an uneasy breather over the past couple of days as they brace themselves for the monumental vote tomorrow on Britain's future in the European Union (EU).

But the calm is only temporary; once the result is known early Friday morning Singapore time, a period of frenzied trading is expected as investors try to position themselves in the aftermath.

Banks here are gearing up for the expected jump in activity, with traders ready to go from the crack of dawn on Friday. 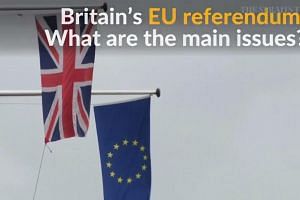 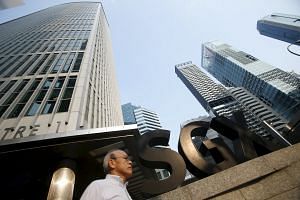 Investors hold back amid Brexit jitters

Mr Anthony Hall, UBS Group's regional head of foreign exchange, rates and credits in Asia-Pacific, said its foreign exchange trading desk here would be fully staffed by 5am, with traders starting about an hour earlier.

"We will have additional coverage from traders working late in New York and some desks in London on both the sales and trading side. Other operations like IT and operations will be ready and gearing up for higher volumes," he added.

Currency markets are still jittery. The pound surged to an eight-year high against the US dollar on Monday amid renewed momentum for the "remain" vote, but dipped again last night. Opinion remains split on how the Brits will vote.

Both DBS Bank and OCBC Bank told The Straits Times that they will be deploying their full teams of traders and taking extra measures to ensure their IT systems can cope.

Ms Wee Wei Min, head of treasury advisory at OCBC, said the team has been putting in extra hours lately, adding: "We have also been pro- actively engaging our customers since last week to address their concerns and manage their trades. By doing so, we hope to minimise the frenzy that may arise from the outcome of the referendum."

Currency markets are still jittery. The pound surged to an eight-year high against the US dollar on Monday amid renewed momentum for the "remain" vote, but dipped again last night.

Opinion remains split on how the Brits will vote. If the local economists' betting pool is any indicator, Mr Song Seng Wun, director and economist at CIMB Private Banking, said that it is "evenly split" at the moment.

While Mr Song has put his money in the "remain" camp, there is still a great deal of uncertainty, with a UBS research note describing the event as one which "resists rational economic analysis".

A Brexit vote is expected to lift the Singdollar.

"When you take out the euro and sterling, two assets which had been safe-haven assets but are now questionable, then you are left scratching your head as to where to put your assets, apart from gold and precious metals. Singdollars might be useful for those looking for a safe haven," said Mr Song.

This could affect Singapore's economy, depending on how long inflows to the Singdollar last.

"With Singdollar appreciation, and if the swap offer rate drops into negative territory, against a backdrop where the economy is not chugging along... it would be detrimental to the economy if that persists for a long period of time," he added.

The pound lost some of its momentum last night, trading at around 1.97 against the Singdollar, down 0.09 per cent from Monday.

Mr Samuel Tombs, chief UK economist at Pantheon Macroeconomics, warned in a note: "The post-referendum lurch in sterling will make its recent gyrations pale by comparison."

UOB economist Lee Sue Ann noted that a Brexit vote will first hit currency markets in Asia, which open before the European ones.

While Asean currencies have held up, there will be an initial sell-off to the US dollar if Britain chooses to exit, she said. However, she noted that the blow is expected to be cushioned by central bank intervention.

Ms Selena Ling, head of treasury research and strategy at OCBC, said that while Singapore's financial market could see contagion effects, the actual impact on the local economy may be muted in the event of a "leave" vote.

She noted that Britain made up just 6.1 per cent of Singapore's foreign domestic investment in 2014, and 0.89 per cent of total exports last year. "The key risk or opportunity for Singapore would be the impact of Brexit on the rest of the EU markets in relation to Singapore, rather than Brexit's impact on the UK itself."