The economy may be slowing but bright spots remain amid the gloomy outlook. Among them, 3D printing and innovation in the infocomm and fintech sectors continue to generate excitement, report Lester Hio and Marissa Lee.

At a factory on the fifth floor of Woodlands Spectrum, a sprawling industrial estate, 10 machines, each about the size of a large cupboard, hum for hours each day as they churn out fully-formed products in metals, plastic, resin, sandstone or wax.

Making anything from machinery gears to figurines, the additive manufacturing facility run by Ultra Clean Asia Pacific (UCT), a unit of Nasdaq-listed manufacturing solutions player Ultra Clean Holdings, is the largest commercial 3D-printing facility in South-east Asia, and still has capacity to spare despite receiving five to 10 orders per day.

Industrial additive manufacturing is set to grow in the future of manufacturing here, thanks to the the versatility, low cost and creative potential of the process, said industry players who see growth in this sector. 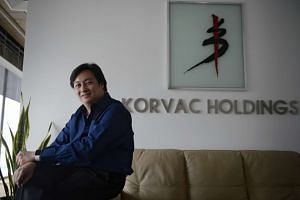 "Additive manufacturing is in its 'mature pioneering stage' here - it will only grow," said Mr Lavi Lev, UCT's senior vice-president for Asia. "It has solid solutions to problems, and in some cases even solutions looking for a problem - which means I have this new technology, maybe someone can do something with it."

Even as traditional manufacturing continues to slow to a grind, posting its first contraction since the global financial crisis, additive manufacturing is showing signs of growth.

In the past four years alone, interest in the real-world applications here have soared, with international companies setting up 3D-printing facilities here.

In fact, the slowdown may end up giving a boost to innovation in the additive manufacturing sector, as companies seek to find cheaper and faster ways of producing parts, said Professor Chua Chee Kai, executive director for the Singapore Centre for 3D Printing at the Nanyang Technological University (NTU).

He added that more companies have approached the centre to figure out how to innovate using additive manufacturing.

Additive manufacturing is in its 'mature pioneering stage' here - it will only grow. It has solid solutions to problems, and in some cases even solutions looking for a problem - which means I have this new technology, maybe someone can do something with it.

The Government has thrown its support behind the industry, identifying it as one of the key sectors to grow back in 2013 under a $500 million "Future of Manufacturing" scheme. Last September, Spring Singapore and the National Research Foundation announced the formation of the National Additive Manufacturing Innovation Cluster, which will help companies develop capabilities in 3D printing.

Led by NTU, the cluster will look at the latest research in 3D printing and study how to translate it into commercial uses in the industry.

US-based safety solutions company Underwriters Laboratories announced last September that it has invested US$8 million (S$11 million) to open a Global Additive Manufacturing Centre of Excellence here, which will focus on training, material and process qualification, advisory and research in 3D printing.

According to the Agency for Science, Technology and Research, the market size of additive manufacturing is projected to grow five-fold from US$2.2 billion in 2012 to an estimated US$10.8 billion in 2021.

Among others, demand is likely to come from the aerospace, defence, auto and medical industries, driven by the prospect of cheaper and customised products.

For instance, SIA Engineering is looking into the application of additive manufacturing to produce cabin parts for aircraft undergoing maintenance, subject to regulatory certifications.

"As we move up the learning curve, we will look into working with original equipment manufacturers to expand beyond cabin parts to support our customers in the maintenance of their aircraft," said a company spokesman.

A version of this article appeared in the print edition of The Straits Times on March 17, 2016, with the headline 'Manufacturing to get boost from 3D printing'. Subscribe
Topics:
More
Whatsapp Linkedin FB Messenger Telegram Reddit WeChat Pinterest Print Purchase Article Copy permalink