Malaysia's central bank intervened yesterday, in an unusual manner according to some bankers, after the ringgit fell sharply against the US dollar in offshore trading, mirroring other sharp falls of emerging-market currencies including the rupiah, the Indian rupee and the South Korean won.

Bank Negara Malaysia curtailed the selling of ringgit for US dollars by Malaysian banks, restricting them to specific corporate payments and at rates that reflected Thursday's valuations, foreign exchange traders say.

But in offshore trading where the ringgit traded freely, it fell to its lowest level in more than 12 years against the US dollar.

The sharp fall in emerging-market currencies was caused by speculation that US President-elect Donald Trump would introduce fiscal measures to boost the US economy, leading to a quick rise in US interest rates and an exodus of funds from emerging markets.

Offshore, the ringgit lost as much as 5 per cent overnight to 4.5395 per dollar, its weakest since at least September 2004, according to Thomson Reuters data. 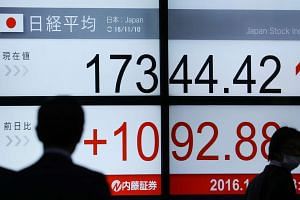 Asian markets, currencies rattled by uncertainty over impact of a Trump presidency 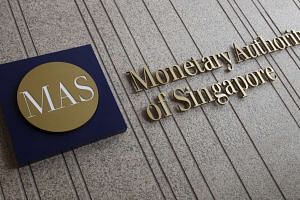 In Malaysia, ringgit spot values hardly budged at 4.29 per US dollar against Thursday's 4.26 close.

In Singapore, the Malaysian currency was slightly weaker against the Singapore dollar at roughly 3.03 to 3.08, several money changers in Toa Payoh and Bedok said.

Some bankers said yesterday's intervention by Bank Negara could be interpreted as a form of backdoor capital controls.

"Bank Negara told onshore banks not to provide any forex to offshore today and cannot trade higher than yesterday's range for today," a banking source told The Straits Times. "This is effectively unofficial capital control."

The Malaysian central bank denied freezing foreign exchange trading with its financial markets committee, saying in a statement that it was only ensuring that "the markets do not price ringgit excessively and out of sync".

Bank Negara governor Muhammad Ibrahim said "normally we don't reveal the specifics" but added that "it is incumbent upon the central bank to... calm market nerves".

"The situation now is the result of speculative positioning... We don't want to be dictated by factors that have nothing to do with the country's fundamentals," he said.

He was speaking at a news conference where he announced better-than-expected third-quarter economic growth of 4.3 per cent.

The controls were fully lifted in 2005 with the unpegging of the ringgit.

Mr Muhammad said that Bank Negara must "show its presence in the market" during ringgit volatility by "asking banks to ensure the pricing is correctly done".