Restructuring plan could make them worse-off than equity investors, they say

Bond holders of KrisEnergy are ready to block a move by the oil and gas explorer to defer $230 million of repayments for five years and at a lower interest rate.

KrisEnergy has not yet begun the process to get consent for its financial restructuring plan but preliminary terms it tabled at a feedback session last week did not sit well with note holders.

They have since joined forces to press for better terms.

"It's not equitable," said Mr Terence Lin, assistant director of bonds and portfolio management at iFast Corp, which is representing some individual investors.

"If they do manage to pass this somehow, shareholders will end up with a very clean company (debt-free in seven years) subsidised by note holders. It sets a nasty precedent for the market to say that bond holders can be taken advantage of."

Note holders holding $38.75 million or 29.8 per cent in principal value of the 2017 notes have come together and will vote down the restructuring unless the terms are improved, according to one of the note holders.

Note holders holding about $33.75 million or 16.9 per cent in principal value of the 2018 series have joined forces so far.

Keppel Corp has a 40 per cent stake in KrisEnergy and private equity firm First Reserve holds 37.5 per cent.

The rest is in public hands.

Note holders gripe that KrisEnergy is using them to lock in a cheap borrowing rate of 4 per cent per annum for the next five years, of which only 2 per cent will be received in cash. 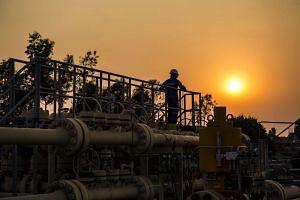 In fact, the implied cost of borrowing for KrisEnergy taking into account the market price of its bonds is closer to 12-15 per cent, Mr Lin said.

Note holder C. T. Ong said that shares of KrisEnergy surged as much as 12 per cent on Nov 3 when the restructuring was announced and closed 1.4 per cent higher at 14.7 cents, whereas bond prices fell. The shares closed 0.1 cent up at 17.8 cents yesterday.

"The market is bullish because the offer is good for equity holders," Mr Ong said.

Mr Lin also flagged that the offer could make bond holders worse-off than equity investors, since the preferential offering of zero-coupon secured notes to shareholders come with warrants that have been priced to be "in-the-money" by around 31 per cent.

This is the equivalent of a 4 per cent compounded rate over the seven-year period.

Keppel has said it would subscribe to up to $140 million of these secured notes.

KrisEnergy, when asked if it would revise its offer in response to the negative feedback, said via e-mail: "All feedback has been taken into account and discussed with the board of directors, our financial and legal advisers, as well as our controlling and supportive shareholders.

"Once note holders review the final restructuring document, the company believes that they will be able to appreciate that their concerns have been listened to and addressed where possible."

KrisEnergy told note holders it would launch the consent solicitation exercise this week or next.

Meanwhile, shipbuilder ASL Marine has told The Business Times that it too is seeking to postpone the repayments of two fixed rate notes due in 2017 and 2018 by three years or more.

Mr Lin said: "The KrisEnergy experience is likely to set some precedent for how companies may 'abuse' the consent solicitation exercise and seek maturity extensions.

"While these can be positive developments for the sustainability of businesses, the terms shouldn't be overly detrimental to the fragmented group of note holders who should be allowed a greater say in the restructuring plans of a company."