Entrepreneurs from around the region could soon have a "community centre" here for sharing and developing new ideas.

Japanese entrepreneur and investor Taizo Son said yesterday he hopes to open the facility by the end of the year, to spur innovation and bring together start-ups.

Mr Son is the founder of Mistletoe, an early-stage venture firm which has backed start-ups such as Zipline, whose drones are used to deliver blood and plasma to hospitals in rural Rwanda, and fully autonomous car maker Zoox.

"We will set up a Mistletoe meet-up place for entreprenuers and innovators around the world so that they can network and create new chemistry," he said.

Mr Son, who has relocated here and is seeking permanent residency, intends to visit local universities and start-up incubators to find projects to support. 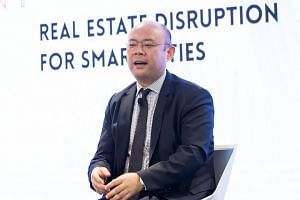 Japan-based Mistletoe, which was founded in 2013, invested in Singapore-based Internet company Garena last year. The investment sum was not disclosed.

Mr Son is also mulling over setting up a centre next year aimed at providing "after-school activities" for young people to learn about entrepreneurship and technology.

He expects to invest US$100 million (S$139.6 million) across South-east Asia over the next five years to support various projects, with "tens of millions" likely earmarked for investments here.

"I think by 2030, Asia will overtake Silicon Valley in terms of innovation," said Mr Son, who is keen on exploring sectors like urban planning, transportation technology, industrial automation, healthcare and education.

Mr Son was the keynote speaker at DBS Bank's Smart Nation Immersion series workshop, which focused on how digital technology is disrupting the real estate sector.

The Great Room, a new co-working space designed to resemble a luxury hotel, was one of the businesses showcased at the event.

The trend towards an "asset-light" strategy has boosted demand for co-working space at The Great Room, which set up its first 15,000 sq ft location at One George Street last year. It plans to open another, double the size, in Marina Bay in September.

"Our aim is to grow to 10 locations across the Asia-Pacific. We are now in talks in Bangkok, Jakarta and Sydney," chief executive officer Jaelle Ang said.