Losing around $100,000 of hard-earned savings when the share market crashed in the 1998 Asian financial crisis prompted Singtel employee Loo Cheng Chuan to devise a safer way to build a nest egg.

Mr Loo, 44, went about creating a low-risk line of defence by using the Central Provident Fund (CPF), particularly the Special Account, as his investment vehicle.

"It's simply creating a financial safety net by topping up your Special and Medisave Accounts at a young age, as young as possible, and just letting it compound over a long period of time to over half a million dollars," he says. "Combine that with your spouse, you will reach a million dollars at age 65."

Mr Loo explained his "1m65" strategy in a video clip that was shown during the CPF Retirement Planning roadshow at Suntec City on Aug 27.

Mr Loo, who works in the digital business department at Singtel, noted in the clip that he realised that all the instruments offered by the CPF are risk-free and guaranteed by the Government. Even creditors will not be able to touch your nest egg. WEIGHING THE PROS AND CONS

Individuals who wish to lock in their money in CPF for the long term will need to balance the long-term gain of having a large balance in their CPF when they retire, with their short-term needs, such as children's education and general expenses.

Armed with this knowledge, he started topping up his Special and Medisave Accounts from age 30.

"In our early 30s, my wife and I worked very hard and we were very thrifty in managing some of our CPF expenses and that led to a full accumulation of our Special and Medisave Accounts," he recalls.

Assuming the interest rate remains at 4 per cent, his savings and those of his wife in these two accounts could compound to almost $1 million by the time they reach 65, even if they choose to stop working a few years after they turn 34 and contributions to these accounts cease. And if they continue working until retirement, the combined amount would be much higher than $1 million.

However, Mr Loo admits that his strategy is not without downsides.

"It requires you to take money from the Ordinary Account to quickly top up your Special Account - which means you cannot be buying big houses and big condos. And, of course, as an ordinary Singaporean, I aspire to these things. But between looking rich and being rich, I prefer to be rich."

In addition, once you put money into the Special Account, you cannot withdraw it for housing purchases, as it is meant for retirement. This poses some risk and discomfort to people.

The comfort and the peace of mind that he would have $1 million waiting for him in his golden years is so great that Mr Loo has started sharing his experience with his church groups and friends. 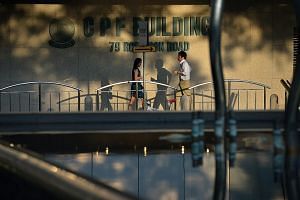 6 little-known facts about the CPF

"I realise that for a family, a safety net of $1 million is a wonderful sum of money. It brings a lot of security in my life and because of that, my whole life changed, my risk profile changed. I can be a bit more aggressive in some aspects of my life because I have this safety net," he says.

WHAT A FINANCIAL EXPERT SAYS

In fact, he worked out that it is possible for a CPF member to accumulate $1 million before the age of 57 by starting to top up the Special Account from age 25.

He based his calculations on a few assumptions, including a gross monthly income of $2,500, a one-month bonus and a 5 per cent yearly increase in the member's salary. Other assumptions are that the member transfers all his Ordinary Account savings to the Special Account. This means he would have no CPF savings available for housing loans.

Mr Ling also assumed that the CPF rules and interest rates will remain unchanged. "Individuals who wish to lock in their money in CPF for the long term will need to balance the long-term gain of having a large balance in their CPF when they retire, with their short-term needs, such as children's education and general expenses."

He added that this method is particularly useful for people in business as CPF money is protected from creditors.

"I have advised a number of my clients, who are businessmen, to accumulate as much CPF as possible so that in the event of bankruptcy, their retirement nest eggs remain unaffected," Mr Ling said.