Insurance may offer ease of mind during travel but not guarantee complete protection, so it's best to scrutinise the policy to avoid any unpleasant surprises

Many of us are realising that it does not cost an arm and a leg to have peace of mind by taking out travel insurance before we set off on our holiday, but there may be a catch.

Travel cover does not guarantee complete protection should things go wrong, so it pays to be aware of insurance terms and conditions that could derail your trip.

The Sunday Times highlights two scenarios provided by the Financial Industry Disputes Resolution Centre (Fidrec) and a checklist for travellers.

Mr Peter Lee (not his real name) bought a travel insurance policy from his bank just two days before departing for a two-week holiday in Japan. His return trip from Tokyo included a few hours' stop at a transit point.

However, as soon as he left Singapore, there was serious civil unrest in the transit location, including at the international airport there. This prompted the Ministry of Foreign Affairs (MFA) here to issue a travel advisory, advising Singaporeans to avoid making non-essential travel to that location.

Mr Lee, who had been monitoring developments while in Japan, then decided to bypass the transit point on his return trip. He bought a new ticket in Tokyo that allowed him to fly directly from Tokyo to Singapore.

Once back, he claimed against his insurer under "trip curtailment" in his policy for the cost of his return ticket. His claim was denied.

Mr Lee took his case to Fidrec. When mediation could not resolve the matter, he opted to have his claim adjudicated there. WHAT THE INSURER SAID

The insurer refused to reimburse him as the policy was bought less than three days before the trip started.

It cited an exclusion clause which stated that the coverage for trip postponement, curtailment and cancellation would not be valid if the policy was bought less than three days prior to the journey. 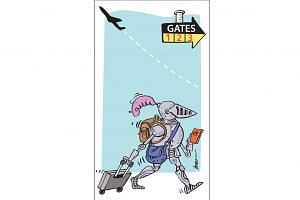 Don't be penny-wise and pound-foolish on travel insurance

Mr Lee argued at the adjudication that he had heeded the MFA travel advisory that was issued after he had left Singapore and that he bought the new air ticket in the light of the developments in the transit location.

He also argued that the exclusion clause cited by the insurer was not prominently displayed in the policy and so he had failed to notice it.

WHAT THE ADJUDICATOR SAID

He noted that safety (in this case, from the unrest in the transit location) was important. But he held that claims made under a travel insurance policy were governed by its terms and conditions, including its exclusion clauses.

In this case, there was an exclusion clause that barred all claims for trip postponement, curtailment and cancellation if the policy was bought less than three days before the trip started.

The adjudicator ruled in favour of the insurer.

Mr John Wong (not his real name) is a 60-year-old overweight man whose parents both died of heart disease before age 65. He went to Japan for a two-week holiday with his family. On the second day there, he had a heart attack.

He immediately sought medical treatment at a Japanese hospital. He survived and had a quick recovery after being hospitalised in Japan for about a week.

He was able to fly back to Singapore with his family on their scheduled flight but he had incurred $110,000 in medical expenses.

Upon his return here, he claimed against his insurance policy for "medical reimbursement". As the maximum allowed was $100,000, he limited his claim to that amount. But the insurer turned it down.

Mr Wong took his case to Fidrec. When mediation failed, he opted to have it adjudicated there.

WHAT THE INSURER SAID

The insurer said Mr Wong's heart attack could not have developed overnight. And that he must have previously experienced some signs and symptoms, before he commenced his trip, which should have caused him to seek medical advice and consultation. These warning signs were either unnoticed by him, or he chose to brush them aside.

Mr Wong's obesity, age and family medical history were cited by the insurer as serious health risk factors. The insurer alleged that his heart condition was a pre-existing illness, which was excluded by the terms and conditions of his travel insurance policy.

He denied that he had a pre-existing heart condition. He argued that in fact, he had never seen a doctor for any heart problem or heart-related condition prior to that attack.

WHAT THE ADJUDICATOR SAID

The adjudicator listened to both parties and evaluated the medical evidence. He noted that the insurer could not produce any medical records whatsoever of Mr Wong's alleged pre-existing heart condition, despite attempts to do so. The adjudicator was also persuaded by Mr Wong of his general clean bill of health prior to that heart attack, which was evident from his recent annual health check-up results.

He dismissed the insurer's allegation of Mr Wong's "serious health risk factors" as "speculation only".

• Disclaimers: The two cases are fictitious and any resemblance to real-life people or actual cases is unintended and purely coincidental. They are not indicative of adjudication outcomes at Fidrec. Each case is decided based on its own facts, law and evidence.

A version of this article appeared in the print edition of The Sunday Times on November 12, 2017, with the headline 'Have cover, will travel'. Subscribe
Topics:
More
Whatsapp Linkedin FB Messenger Telegram Reddit WeChat Pinterest Print Purchase Article Copy permalink