Grow your money by getting a Supplementary Retirement Scheme account, saving consistently and investing funds

The year is drawing to a close so there is just under two months to pump some cash into the Supplementary Retirement Scheme (SRS) to make your money work harder and for you to be eligible for some tax relief.

The SRS is a national voluntary scheme set up in 2001 to complement the Central Provident Fund by giving individuals an incentive to save consistently for retirement, while also enjoying tax benefits. 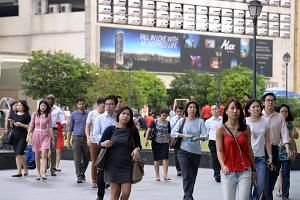 So there is still plenty of room for the SRS to expand its reach among the working population, with about 600,000 people earning an assessable income of $50,000 a year or more.

In drawing up one's retirement plan, the SRS should be used as one of the planning tools to
supplement other investment options. ''

Lau Wai Pheng, a consultant at financial advisory firm Providend, says that the scheme is more suitable for higher-income earners with cash that can be set aside until retirement.

The scheme appears to be most popular among those aged between 36 and 55, a group likely to be at the peak of their earning power.

Ministry of Finance data shows that as of last December, 31 per cent of all SRS account holders were between 36 and 45 years old, while 34 per cent were aged between 46 and 55.

Banks have been offering incentives such as cash, vouchers and movie tickets to encourage people to set up SRS accounts and start investing before the end of December.

At OCBC, the first 1,500 individuals who start a new SRS account with $8,000 get a $30 retail voucher. There are $20 vouchers for every $10,000 of SRS savings invested in selected single premium insurance plans and a reduced sales charge of 2 per cent for certain unit trusts.

You need to know how the scheme works before deciding if it is right for you.

The three SRS operators are DBS, OCBC and United Overseas Bank (UOB). SRS participants can contribute varying amounts subject to an annual cap, at their own discretion.

The maximum amount you can contribute is $12,750 for Singaporeans and permanent residents (PRs) and $29,750 for foreigners.

Come next year, the annual SRS contribution caps will be raised to $15,300 for Singaporeans and PRs and $35,700 for foreigners.

Hopefully, this will provide an impetus for people to squirrel away more money via the SRS for retirement.

Contributions to the SRS are eligible for tax relief. Each dollar of SRS contribution will reduce your income chargeable to tax by a dollar.

Based on information provided by your SRS operator, you will be granted tax relief automatically. Contributing to the SRS regularly instils a savings discipline, so retail investors are encouraged to think long-term when investing.

Ms Chung Shaw Bee, UOB's head of wealth management for Singapore and the region, says the SRS encourages investment discipline as all returns on investments have to be deposited back into the account, either for savings or re-investment.

"We encourage our customers to start planning early for their retirement so as to benefit from the compounding effect of time," she adds.

"Having a long time horizon can help to smooth out the impact of volatility on investment holdings. In drawing up one's retirement plan, the SRS should be used as one of the planning tools to supplement other investment options."

Anyone can make SRS contributions at any age, unless they have started withdrawing from their SRS accounts either at or after the age of 62, or on medical grounds.

About 34 per cent of total SRS funds - around $1.66 billion - is being left idle as cash, which earns a negligible return. As at last December, total SRS savings amounted to nearly $5 billion.

As the three SRS operators offer a paltry 0.05 per cent interest per year for SRS funds, retail investors are encouraged to invest so as to make their savings work harder while they enjoy tax savings.

From the start of next year, the annual SRS contribution cap will be raised to $15,300 for Singapore citizens. So, assuming you are 40 years old and this time contributing $15,300 a year to an SRS account, if you invest your SRS money and achieve a rate of return of 4 per cent a year, you would have saved $545,000 by age 62.

You are free to invest in various financial assets, including shares, bonds, unit trusts, fixed deposits and insurance.

The latest SRS figures show there is an encouraging trend of SRS members investing their savings in shares, real estate investment trusts and exchange-traded funds (ETFs). About 26 per cent of SRS funds were invested in such instruments as at last December, well up from the 9 per cent in 2005 and the 1 per cent in 2001.

Finance experts say that instead of timing the market, people can use their SRS funds to buy stocks monthly through regular saving plans.

The POSB Invest-Saver, for example, allows you to invest affordably in either Singapore bonds or blue-chip stocks via two ETFs listed on the Singapore Exchange, from just $100 a month.

Another is OCBC Bank's Blue Chip Investment Plan, where an individual can use SRS funds to buy selected share counters each month.

"This reduces both the risk of market timing and your average price per share over time," notes Mr Ling Seng Chuan, OCBC head of deposits.

"You will also enjoy the flexibility to make changes as there is no lock-in period. Investors can give instructions to amend share counters or the investment amount, and sell your shares through OCBC online banking."

Similarly, Phillip Capital's Share Builders Plan is a regular fixed- dollar amount investment plan that enables you to buy shares on a consistent and incremental basis so as to build up a portfolio.

There is also the possibility of losing money from investing your SRS funds, especially if you are not financially savvy, so it is prudent to invest wisely or seek financial advice.

Investment gains will accumulate tax-free in the SRS before withdrawal and only 50 per cent of the withdrawals are taxable at retirement, which is the statutory retirement age at the time of your first contribution - now 62.

You may spread your withdrawals over a period of up to 10 years to meet your financial needs when you withdraw your SRS savings at or after 62. The 10-year period starts from the date of your first such withdrawal.

With lower or nominal income at retirement, you may end up paying little or no income tax.

Before July this year, all SRS withdrawals had to be made in cash. This meant that the investments had to be liquidated before the sales proceeds could have been withdrawn in cash.

The good news is that from July, the rules have changed to allow SRS members the option of withdrawing an SRS investment by transferring the investment out of their SRS account (for example, into their personal Central Depository account in the case of shares), without liquidating their SRS investments.

Certain conditions apply, such as making withdrawals on or after the SRS member turns 62 or on medical grounds. All other withdrawals from an SRS account, including premature withdrawals, must still be made in cash.

If you are strapped and need to withdraw funds before you turn 62, you can do so at any time, but 100 per cent of the sum withdrawn will be subject to tax. To avoid this, it is prudent to park funds that you can really set aside for the long term in your SRS account.

In addition, there will be a 5 per cent premature withdrawal penalty on the sum withdrawn. This is waived on exceptional grounds such as death, medical reasons and bankruptcy.

Most individuals tend to wait until the end of the year before contributing to save on income tax.

Ms Lui advises that the earlier you set aside funds in your SRS account, the sooner you can channel them towards investment and insurance products that can help you generate non-taxable returns.

"Our customers have been taking a proactive approach on the funds in their SRS portfolio. Close to 70 per cent of the contributions are invested in unit trusts, shares, bonds and insurance products," she adds.

DBS says that the number of its SRS account holders has grown by nearly 20 per cent year-on-year. Close to half of the SRS accounts are with DBS.

Ms Lau says the SRS allows yearly contributions and hence the opportunity to invest regularly, be it monthly or quarterly. "This dollar-cost averaging lessens the risk of investing a large amount in a single investment at the wrong time."

A version of this article appeared in the print edition of The Sunday Times on November 01, 2015, with the headline 'Get tax relief while building your nest egg'. Subscribe
Topics:
More
Whatsapp Linkedin FB Messenger Telegram Reddit WeChat Pinterest Print Purchase Article Copy permalink