The Life Insurance Association Singapore (LIA) is reviewing policies around the recruitment of rival agents, and plans to issue new guidelines to its members in the near future.

The move comes after the shock migration of 300 or so Great Eastern (GE) agents - nearly 10 per cent of its agency size - to rival AIA's newly set up financial advisory arm, AIA Financial Advisers.

Sources said that one of the new LIA guidelines will specify the number of months during which migrated agents have to be accompanied by managers at their client meetings.

This will up the ante. Now, agents with more than two years' experience and with a gap of no more than 12 months from their previous appointment are typically exempted from this requirement.

Such rules will help address concerns about potential mis-selling or churning of policies by agents under pressure to meet sales targets at their new firms.

Meanwhile, GE, the latest casualty in the poaching battle, has set up a dedicated advice service to help customers unsettled by news that so many agents are jumping ship. Apart from a telephone hotline (6839-4565), clients can also e-mail inquiries to wecare-sg@ greateasternlife.com.

The firm told The Straits Times that affected policyholders will soon be advised about the new agents who will look after their insurance needs and the measures taken to protect their interests.

MR KHOR HOCK SENG, Great Eastern Holdings group chief executive , on the risks after the mass poaching of its agents. 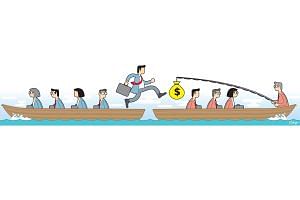 New agents will be assigned once a customer's current representative has served the notice period.

GE also advised that customers who want to change policies must note that switching plans could mean re-underwriting, which could bring premium increases, benefit exclusions or reduced coverage.

Industry observers said GE is the third-biggest insurer here in terms of agents with about 3,500, while AIA and Prudential are estimated to have 4,400 each.

Great Eastern Holdings group chief executive Khor Hock Seng said GE's business is "all about trust". He said: "Our priority at this time is to provide advice and guidance to help these policyholders make informed decisions and update them on measures taken, in particular the assignment of new representatives to look after their needs."

While agent poaching is part and parcel of the insurance scene here, financial experts do not view it as a positive practice. They feel it could result in mis-selling by cross-over agents under pressure to meet sales targets at new firms.

In the GE case, the AIA offer to the GE agents - believed to be an estimated $100 million - included sign-on bonuses and a five-year "bond" period during which the monetary incentives could be clawed back if sales quotas are not met.

Mr Khor said the mass poaching of its agents is "unhealthy for the industry". "It could be detrimental to customers' interests in the long term. We have expressed our concerns to the regulators and will continue to work with them to ensure that customers' interests are protected at all times.

"We will also proactively monitor for any irregular policy transactions and will report these to the regulators as required."

The Monetary Authority of Singapore (MAS) said that large-scale movements of representatives from one institution to another could give rise to risks of improper switching of insurance policies and cause disruption to business operations.

Offering high sign-on bonuses and other financial incentives may also drive up costs in the industry.

It added: "LIA will be working on some parameters on movements of representatives and MAS will be monitoring developments closely."