It will take control of world’s second-largest copper mine in Papua under $5.3b deal: Source

Indonesia is set to acquire a majority stake in the world’s second-biggest copper mine.

All paperwork is complete for the government to sign a final agreement to acquire a majority stake in the Grasberg copper mine in Papua province, a source familiar with the transaction told The Straits Times.

The US$3.85 billion (S$5.3 billion) deal will allow Indonesia to own a 51 per cent stake in the mine, which also produces gold. The country currently owns about 10 per cent of it.

The deal comes after more than a year of negotiations between Indonesia and United States-based Freeport-McMoRan and its partner Rio Tinto. A preliminary agreement was signed in July.

The deal will be financed by bank loans or proceeds from a bond sale, said the source who spoke on condition of anonymity.

“The (impending) sale and purchase agreement would be the basis for the government to issue a permanent IUPK (special mining permit), so Freeport can get a contract extension for two 10-year periods,” the source said.

The Indonesian government has promised Freeport a contract extension if the company, whose current contract expires in 2021, agrees to give up its majority stake in the mine and commits to build a new smelter in Indonesia.

The deal, which is a record corporate acquisition in Indonesia, could fan nationalist sentiments among voters ahead of the legislative and presidential elections on April 17 next year. President Joko Widodo is seeking a second five-year term. 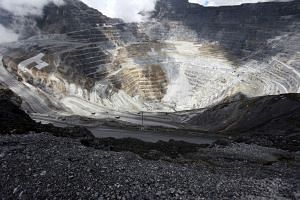 Indonesia to sign landmark $5.5b deal to increase stake in Papua mine to 51%

Observers have hailed the deal, saying Mr Joko, who is also known as Jokowi, is fulfilling his campaign promise back in 2014.

“This is Jokowi giving back natural resources sovereignty to Indonesia, a move that deserves much appreciation,” political analyst Arie Sujito of the University of Gadjah Mada told The Straits Times.

“Previous leaders did not have the willingness or guts to do that.”

Freeport entered Indonesia in 1960s when first president Sukarno handed over the reins to Mr Suharto.

It started developing the Grasberg mine in the early 1970s. The project had helped to improve the economy at a time when the country lacked jobs and infrastructure.

But politicians and analysts said the contract had not been negotiated transparently and had given unduly favourable terms to Freeport.

They have increasingly questioned the contract terms since the fall of Mr Suharto in 1998, which sparked various reforms that led to Indonesia having democratically elected presidents.

The impending deal comes after Canada’s Barrick Gold agreed on Monday to merge with Randgold Resources, whose shares are traded on the London stock exchange, creating the world’s biggest gold miner.

A version of this article appeared in the print edition of The Straits Times on September 27, 2018, with the headline 'Indonesia to acquire majority stake in big mine'. Subscribe
Topics:
More
Whatsapp Linkedin FB Messenger Telegram Reddit WeChat Pinterest Print Copy permalink