Chinese technology giant Huawei unveiled its own open-source software ecosystem yesterday with the goal of attracting global developers and players to use its system.

Huawei will invest US$1.5 billion (S$2 billion) in the next five years in an upgraded version of its existing developer programme. It will provide funding to universities, individuals, start-ups and enterprises to support them in learning, product development and marketing.

The company aims to work with 1,000 universities around the world to nurture five million developers in five years.

This step-up in efforts to bring more talent and industry players into Huawei's ecosystem comes as it faces a United States trade ban that would cut off its access to US components and technology when it eventually comes into force.

While the firm was blacklisted in May, it was granted a second round of a 90-day reprieve last month to allow it to continue working with its US suppliers.

Huawei's latest flagship smartphones unveiled this week will not come with Google services or apps, although they still function like Android phones as they run on the open-source version of the operating system.

Observers note that a prolonged ban on Huawei could lead to a splintered tech world with two sets of technologies in two economic camps.

When we talk about open-source software, we often hear about Linux and Google. Now we will have China's own version.

Mr Zhang acknowledged that it would be challenging, both on the technical and business levels, to get developers and firms to come on board Huawei's open-source ecosystem.

"The business challenge is in moving those from a mature system to an emerging one," he said, when asked at a briefing about the difficulties in creating such an ecosystem.

That is why the firm is focused on making hefty investments in its developer programme in order to provide sufficient support for the developers, he added.

Still, industry experts are hopeful that Huawei could be China's voice on the global open-source stage.

"When we talk about open-source software, we often hear about Linux and Google," said Professor Liang Xiaoyao from Shanghai Jiao Tong University, author of a new AI textbook launched by Huawei yesterday.

"Now we will have China's own version," he added, noting that in the next decade, Huawei will be a key driving force within China and the global open-source world.

Mr Zhang said at the last keynote session of the three-day annual conference that since the start of its developer programme in 2015, the firm has groomed 1.3 million developers and worked with 14,000 software and hardware makers. 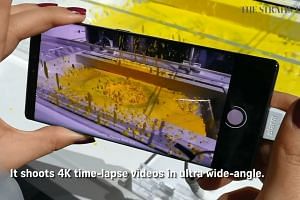 He cited examples of what developers have produced in the past few years using Huawei's technologies, such as rainforest protection, desertification prevention, and robots that can help sort rubbish.

Among them is a Singapore company that has developed a digital weighing scale for use in supermarkets. It can automatically recognise the fruit, weigh it and print out the price label.

"If this weighing scale can differentiate between apples and oranges, then it's too easy.

"(But) it can actually tell whether the apple is a Japanese Fuji apple or New Zealand's Envy or Gala apple."

Mr Zhang noted that Singapore is a key location for Huawei to expand its cloud and AI business to serve the Asia-Pacific region. It also operates an AI open lab in Singapore, where Huawei engineers help local developers.