Troubled retail start-up Honestbee has submitted an application to the High Court to start a court-supervised restructuring process as it seeks six months of reprieve from creditors it owes more than US$180 million (S$248 million).

The firm is looking to restructure its liabilities and seeking a moratorium against enforcement actions and legal proceedings, Honestbee said in a statement yesterday.

Actions were taken to "protect and preserve the value of its businesses while it restructures its operations across Asia", it added.

A company spokesman said layoffs have been made as part of a cost-cutting and streamlining exercise. Thirty-eight of its 350 employees in Singapore were laid off, the spokesman said, adding that no further cuts will be made. The affected employees were those working in operations and engineering.

"The move is necessary to ensure that the company has the right structure in place for long-term stability and success," the firm said.

Honestbee confirmed an earlier Business Times report yesterday that it owes more than US$180 million to its creditors.

Responding to queries from The Straits Times, an Honestbee spokesman said the bulk of its creditors are venture capital funds, including its key backer Formation Group, Singapore-registered entity A Honestbee, and associates of Honestbee chairman Brian Koo.

Mr Koo, whose family controls South Korean technology giant LG, is the founding partner of Silicon Valley-based Formation Group. The largest shareholder of A Honestbee is Yesco, a unit of South Korean conglomerate LS Group, that is owned by Mr Koo's family. 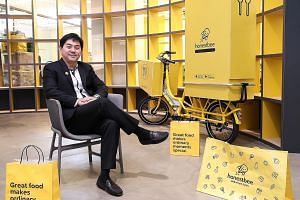 Previous reports have stated that Honestbee raised US$15 million in 2015. A 2017 regulatory filing also noted that the start-up raised US$50 million via convertible notes to A Honestbee. Convertible notes are a form of short-term debt that converts into shares in the issuing company.

Private companies like Honestbee are not obligated to disclose their financials to the public.

Honestbee has engaged Oon & Bazul as its legal adviser and DHC Capital as its independent financial adviser.

As part of the restructuring process, Honestbee will work closely with its advisers, creditors and stakeholders to achieve the best possible outcome for all interested parties, the firm said.

Chief executive Ong Lay Ann, who held a town hall meeting at the company's headquarters yesterday to address the court application and retrenchment exercise, said the company will be reviewing each business line in every market that it operates in.

"This review will allow us to decide where we can best deploy our assets and strengths to create a competitive advantage for the company," said Mr Ong, whose appointment as CEO was announced earlier this week.

Singapore Management University law don Eugene Tan said the restructuring process for Honestbee could be completed in a matter of months, or drawn out over a fairly long period. "The ball is pretty much in Honestbee's court to demonstrate that they are worth sustaining as a company, and that their business model is worth investing in," he said.

Comparing the situations of Honestbee and water treatment company Hyflux, which similarly sought court protection to reorganise its debt, Associate Professor Tan said the start-up's case is different as it does not operate in a critical industry and does not have the same public goodwill and brand recognition that Hyflux has. However, its debt is less problematic than Hyflux's, he added.

National University of Singapore associate professor Lawrence Loh said the market in which Honestbee operates in is challenging, as it is up against established players in the grocery space with entrenched customer bases. He said that while the restructuring will give the start-up some breathing space, the current court action is possibly a precursor of things to come.

The firm's court application follows its woes in recent months. In April, the home-grown company said it was suspending some operations in Asia and cutting its global headcount by 10 per cent as part of its strategic review. On May 15, the firm announced it was stopping its food delivery service in Singapore.