The greenback sank to a three-year low against the Singdollar yesterday after United States Treasury Secretary Steven Mnuchin said he would welcome a weaker currency.

His comments exacerbated an ongoing slide in the US dollar, which had already fallen 8 per cent against the Singapore currency last year.

The trend is good news for Singapore online shoppers, but for exporters - who usually buy and sell overseas in US dollars - it is a double-edged sword.

A weakening US currency translates into lower earnings for exporters in Singdollar terms, but also means they pay less for imports.

Mr Mnuchin's comments - seen by markets as a departure from traditional US currency policy - were made at the World Economic Forum in Davos, Switzerland. "Obviously, a weaker dollar is good for us as it relates to trade and opportunities," he told a press briefing.

Mr Stephen Innes, head of Asia-Pacific trading at Oanda, said: "While we already knew the ad-ministration previously favoured a weaker dollar, US Treasury Secretary Mnuchin's comments caught the dollar prone and defence-less, opening floodgates to a massive wave of dollar-selling, and accelerated the expected US dollar downtrend." Phillip Futures analyst Samuel Siew said the greenback could weaken further in the short term, but is likely to recover in the longer run on the back of a strengthening US economy. In addition, demand for US dollars is set to rise as more US firms are likely to repatriate funds to take advantage of new tax laws.

"Major corporations such as Apple have announced their intention to return foreign earnings, left in foreign banks as stockpiles, to the US. With funds flowing into the US, the demand for US dollars is expected to increase. When that happens, the US dollar will strengthen," Mr Siew said.

Singapore exporters said the weakening greenback has eaten into profit margins because sales are done in US dollars, while costs are largely in Singapore currency.

"We price our goods in US dollars, so when the US dollar goes down, we have less to cover our Singdollar expenses," said Ideal Electric Singapore CEO Charles Koh.

The company, which designs and manufactures high-end LED light fittings, exports most of its products to Europe, Australia and Japan. 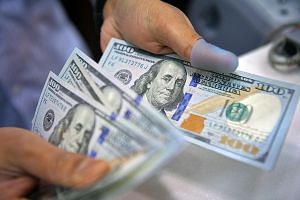 "If currency fluctuations are within the 3 per cent to 5 per cent range, most companies usually just bear with them. Anything more and companies will be forced to look for ways to control costs," Mr Koh said.

He added that his company is now paying closer attention to foreign exchange hedging, given that more currency volatility could be on the cards this year.

The company, which refurbishes parts for flat panel and semiconductor makers, has suffered at least $10,000 in foreign exchange losses every month for the past three months. "We used to hedge, and have since stopped. But because of these fluctuations, we are considering hedging again," said Mr Ang.

While the company deals with most of its customers in US dollars, it has a small share of Singdollar-denominated sales and will be pushing hard over the next few months to raise these, he added.