Two weeks ago, United States President Barack Obama signalled to Congress that he was moving for a vote on the Trans-Pacific Partnership by sending them a Bill on the TPP.

It was the clearest indication yet that Mr Obama remains determined to push the 12-nation deal through despite strident opposition from both the Republicans as well as his own Democratic Party.

He intends to hold a "lame duck" vote on the TPP after the presidential election is over, hoping to capitalise on the fact that the current Speaker of the House and the majority leader are all still for the TPP.

Some see the move as a last desperate roll of the dice, while others see it as an opportunistic move to put in place the final piece of his foreign policy legacy.

The move is unlikely to pass - prominent members of both parties have pledged to block the vote - and could result in the US failing to ratify the same deal it has campaigned hard for over the past few years.

In fact, if the US does not ratify the deal, the entire TPP could collapse as it will not be able to come into force, said Singapore's Ministry of Trade and Industry (MTI). "The Obama administration is working hard to prepare the TPP for successful passage through US Congress," said the MTI spokesman.

As a small trading nation, it is in the national interest for Singapore to ensure that trade routes remain open and free trade flourishes. Singapore could continue to seek out other free trade deals on its own, which it has done very successfully in the past. But losing a rare opportunity to craft a multilateral deal that entrenches and promotes free trade in the Asia-Pacific must certainly feel like a body blow for the small Republic.

But without political support from either side, the TPP is in big trouble, said Mr Jeffrey Schott, a senior fellow at the Peter Institute for International Economics.

TPP: A MAJOR LOSS FOR SINGAPORE?
Singapore, which was part of the original group that conceived the idea of a trans-Pacific trade deal, may not feel the direct effects of the loss of the TPP in the short term.

After all, out of the 11 other TPP economies, Singapore has locked in bilateral deals with six of them. Another three - Malaysia, Vietnam and Brunei - are in Asean and covered by the Asean Economic Community, a regional free trade area. Only Canada and Mexico do not have a free trade agreement with Singapore. But even these are currently being worked on and could be pushed to completion should the TPP fail.

According to the Peterson Institute for International Economics, the TPP is expected to raise real incomes by 3.9 per cent in Singapore alone, or by about US$19 billion (S$26 billion) in about 15 years in 2030.

This works out to about 0.25 per cent growth in GDP every year. In other words, not a lot.

But Associate Professor Chor believes that these calculations understate the true cost of the trade deal. "We would be losing out on a major opportunity to lock in and deepen our economic relationships with a broad set of trans-Pacific partners," he said. "Given our position as a hub for commercial services, and our reputation for business-friendly and stable institutions, we would have stood to gain from an expansion in demand for these services by firms from partner countries seeking to expand their reach, say, in East and South-east Asia." 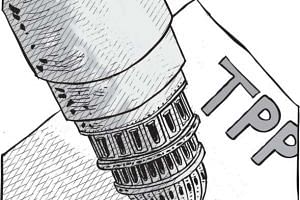 PM Lee is right - this US Congress must pass the TPP

Indeed it is the intangibles that could cost Singapore much more than the dollars and cents of the trade deal.

On the political front, the TPP was meant to be a key thrust of the US' foreign policy to counter China's rising influence in the Asia-Pacific. The US would be in a much weaker position should it drop the TPP at this late stage.

Indeed, in recent years the Chinese have been asserting their will in the region.

China's muscular handling of the South China Sea dispute that involves several Asean countries shows the urgent need for a counter-balance in the region.

But if the US were to abandon the TPP, trust could well be eroded even among its staunchest allies, warned Prime Minister Lee Hsien Loong on a recent visit to the US.

"Your partners, your friends who have come to the table, who have negotiated, each one of them has overcome some domestic political objection, some sensitivity, some political cost to come to the table and make this deal," Mr Lee said. "And if at the end, waiting at the altar, the bride doesn't arrive, I think there are people going to be very hurt."

Almost simultaneously, the Chinese have been pushing hard to wrap up negotiations for the China-led Regional Comprehensive Economic Partnership (RCEP).

The RCEP is a proposed free trade agreement involving the 10-member Asean, Australia, China, India, Japan, South Korea and New Zealand. It is seen as a counter to the US-led TPP.

More crucially, the TPP is also symbolic of the struggle between two sides of the new political divide: staying open and bordering up. As an editorial in The Economist noted: "America is not alone. Across Europe the politicians with momentum are those who argue that the world is a nasty, threatening place, and that wise nations should build walls to keep it out."

Those calling for higher walls and closed borders are already emboldened by Brexit; the failure of TPP could further fortify their will.

As a small trading nation, it is in the national interest for Singapore to ensure that trade routes remain open and free trade flourishes.

Singapore could continue to seek out other free trade deals on its own, which it has done very successfully in the past.

But losing a rare opportunity to craft a multilateral deal that entrenches and promotes free trade in the Asia-Pacific must certainly feel like a body blow for the small Republic. Seen in this light, the failure of the TPP is not just another trade deal gone sour but could mark the start of a dangerous path down to a world more closed than open.

If anything, that is what Singapore should be most worried about.

A version of this article appeared in the print edition of The Straits Times on August 24, 2016, with the headline 'Failure of TPP will be blow to free trade and S'pore'. Subscribe
Topics:
More
Whatsapp Linkedin FB Messenger Telegram Reddit WeChat Pinterest Print Purchase Article Copy permalink