15.6% fall due in part to high base comparison but it is still steeper than the 12.3% forecast

Exports plunged last month at the sharpest pace in three years, raising the question of whether Singapore's growth estimates for the first three months of the year may have been a tad too optimistic.

Non-oil domestic exports (Nodx) dived 15.6 per cent last month, a rate of decline not seen since February 2013, but that was in part because shipments last March came in at an unusually high level.

But this was still steeper than the double-digit fall of 12.3 per cent that economists polled by Bloomberg had predicted.

The data yesterday came just days after flash figures from the Ministry of Trade and Industry (MTI) showed Singapore growing 1.8 per cent in the first quarter from a year ago, and zero per cent from the last three months of last year.

Last month's Nodx fall was broad-based. Electronics exports were down 9.1 per cent from a year ago. Non-electronics fell 18 per cent, partly due to a steeper- than-expected slide in the shipments of drugs. Drugs fell 30.9 per cent while petrochemicals fell 16.4 per cent. Not helping matters was a plunge to nearly zero (a 99.6 per cent drop) in ship and boat structure exports. 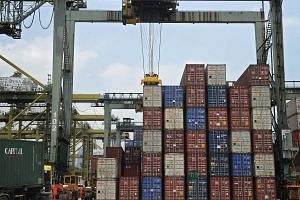 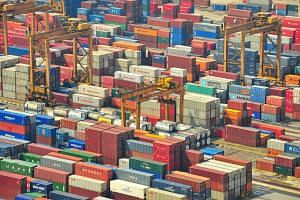 The broad and unexpected fall in exports suggests the possibility of March manufacturing growth numbers coming in below the level assumed in MTI estimates, said HSBC economist Joseph Incalcaterra.

DBS economist Irvin Seah said there is a risk that weaker March data could tip Singapore into the beginning of a technical recession. But he added that flash estimates should always be taken with a pinch of salt. "The service sector often gets its figures revised upwards when the final data is out. In past years, quarter-on-quarter revisions could be as much as 3 percentage points."

Nodx to all of Singapore's top 10 markets, except Japan and Hong Kong, fell last month. The sharpest fall was seen in shipments to the European Union (EU), which fell by 39.1 per cent from a year ago, the worst drop since February 2013. This was due mainly to the volatile pharma segment.

Last year, the EU was Singapore's second-largest export market for non-oil domestic exports after China and ahead of the US, said IE Singapore.

Shipments to China fell 14 per cent last month from a year ago, while those to emerging markets contracted 35.2 per cent, the worst fall since December 2012.

Said Mr Simon Li, chief executive of Feoso Oil Singapore: "The shipping world is doing so badly that all the shipping companies have cash-flow problems nowadays. I expect about 40 per cent of dry-bulk carriers will go bust this year or in the first half of next year.