While 60 per cent of the gap can be explained, part of it may be due to persistent gender bias

A study by jobs website Glassdoor has found that Singapore women earn about 13 per cent less than men, and some of that pay gap may be down to persistent gender bias.

About 60 per cent of the gap can be explained, with 45 per cent due to differences in education and experience between men and women, said the report released yesterday by Glassdoor Economic Research.

The other 16 per cent, it added, is due to the sorting of men and women into different industries and occupations.

"This means the unexplained pay gap could be attributed to factors such as workplace bias, whether intentional or not, negotiation gaps between men and women or other unobserved worker characteristics," said the report, which was based on a sample of more than 5,000 salaries reported by Singaporean employees.

In the sample, women had an average base pay almost $10,000 less than men annually.

While the wage gap was close to 13 per cent when looking at the median base pay, it fell to 5.2 per cent when workers' ages, job titles, employers and locations, among other factors, were considered.

This adjustment provides for more direct comparison of wages. Assistant Professor Aliya Hamid Rao of the Singapore Management University noted that such adjustments typically indicate discrimination or bias, although they alone are not proof. Dr Noeleen Heyzer, a social scientist and a distinguished visiting fellow at the S. Rajaratnam School of International Studies, said: "The gap of 5 per cent, reflecting income forgone, could seem small, but compounds over time over the course of one's working career."

A smaller initial salary results in proportionally smaller raises, making it impossible for women to catch up with the income earned by their male counterparts throughout their careers, she added.

"The magnitude of the pay gap is reflective of occupational and industry segregation, with women often being poorly represented in high-skilled, high-value added, better-paid jobs," said Dr Heyzer.

She added: "The disproportionate burden of unpaid care work borne by women towards child-rearing, housework or caring for the elderly makes it more likely for them to exit the workforce or have intermittent patterns of work."

This issue persists despite progress made in Singapore, such as in policies that help women maintain work-life balance.

The labour force participation rate of women here has also risen from 48 per cent in 1990 to 60 per cent last year. 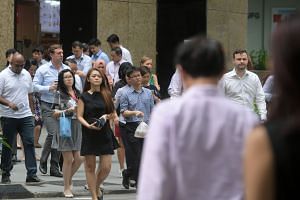 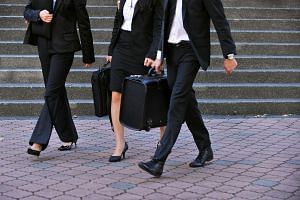 According to Ministry of Manpower figures, the gender wage gap stands at 9 per cent as of 2017.

There are economic benefits for this, she noted, citing a McKinsey study that said Singapore could add more than US$26 billion to its annual gross domestic product by 2025 by doing so.

Prof Rao flagged occupational segregation, among other issues, as one that will prove tough to resolve. This refers to men and women being funnelled into different jobs and sectors, with areas that women are in typically being devalued.

She said: "Research from outside Singapore which looks at these trends suggests that this is not about male-dominated occupations requiring more skills...

"The evidence for this is from research which has shown, through demographic analysis, that as women enter occupations that had been male-dominated, the wages in those occupations start declining."

She added that research also suggests the gender wage gap is driven by motherhood, with mothers being especially susceptible to not being promoted or put into lesser roles.

"Some research has shown that the wage gap between mothers and comparable non-mothers is actually higher than the gender wage gap," she said.

These can eliminate entrenched gender biases at work, he said, "whether by increasing female representation at senior levels... or by encouraging employers to study their own payroll data to conduct thorough gender pay audits".