SINGAPORE - Despite tighter levels of liquidity and perceptions of gender bias in the pitch process, female entrepreneurs based in Singapore are achieving the same funding success as men, more than in most established markets worldwide, new research by HSBC found.

Its survey polled more than 1,200 entrepreneurs in eight markets across Asia, Europe, US and the Middle East, including 151 from Singapore.

It found that Singapore-based entrepreneurs face one of the toughest hurdles when it comes to securing capital, with 59 per cent having been rejected for funding, just behind Hong Kong at 68 per cent.

The lower success rate for funding in Singapore is most likely linked to the limited amount of capital here relative to other countries, a HSBC spokesman told The Business Times on Wednesday (Oct 9).

Latest data from the Singapore Venture Capital & Private Equity Association (SVCA) show that in 2018, venture capital and private investment fundraising in South-east Asia - the bulk of which came from Singapore - totalled US$1.8 billion. This was a fraction of the US$80 billion raised in the whole of Asia, and the US$459 billion raised globally, said HSBC.

HSBC's survey also found that 41 per cent of female entrepreneurs in Singapore have experienced gender bias when attempting to raise capital for their business, particularly when asked about their credibility and personal circumstances. This ranks higher than in Hong Kong (31 per cent), but lower than other international markets such as the UK (54 per cent) and US (46 per cent).

Being cognisant of the obstacles they might face, 93 per cent of female entrepreneurs in Singapore also sought advice ahead of the pitching process to feel as prepared as possible, the survey found.

Perhaps as a result of this preparation, 54 per cent of women in Singapore secured the total funding they sought, on a par with the men here (56 per cent). This makes Singapore the most gender-neutral market for business capital raising globally, with the exception of Hong Kong where women (56 per cent) edged out men slightly (53 per cent).

In the UK and US, men entrepreneuers were more successful than their female counterparts, with 63 per cent raising the capital needed versus 57 per cent (UK) and 53 per cent (US) of women. 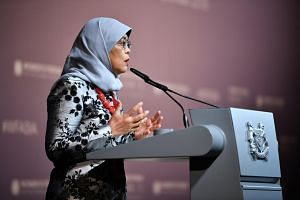 Tan Siew Meng, HSBC's regional head of global private banking for Asia-Pacific, said: "The report raises the question of whether business capital funding in Singapore is simply a tough but gender-agnostic market, or whether Singapore-based female entrepreneurs are forcing gender parity when it comes to funding.

"Either way, the report reflects my experience of Singapore-based female entrepreneurs as being tenacious, committed and meticulously prepared. The fact that Singapore is demonstrating gender parity when securing capital bodes well for the country."

HSBC added that notwithstanding the tighter levels of available funding in Singapore, the situation is changing with the focus increasingly shifting to Singapore as an entrepreneurial incubator, and launch pad for the region.

Among other things, the SVCA cites government initiatives such as tax incentives and a variable capital company legal structure as catalysts for making Singapore increasingly attractive for fund managers.