Singapore's small, trade-dependent economy is under the weather - and likely to remain so for some time.

While the country has not yet sunk into a full-blown recession, its fortunes are tied closely to those of the world economy and the outlook there is far from cheery.

Advance estimates tip Singapore's growth to come in at just 0.6 per cent in the July to September period, compared with the same quarter a year ago, the weakest rate since 2009.

Economists expect this to be revised upwards slightly when final numbers are released next month, but have warned that the slowdown will persist.

Government forecasters expect full-year growth to come in at the lower end of 1 per cent to 2 per cent, and only slightly higher next year.

Cracks are already emerging in the labour market - in the third quarter, total employment fell for the second time since the 2009 global financial crisis.

Layoffs - which include retrenchments and aborted contracts - fell slightly in the third quarter to 4,100, down from 4,800 in the preceding quarter. 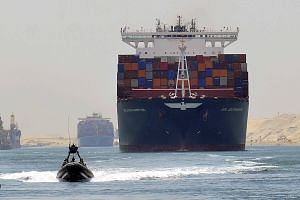 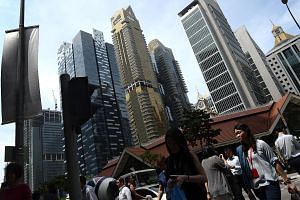 But with "subdued global economic conditions and internal economic restructuring", more workers were affected than the 3,460 who lost their jobs a year ago, the Ministry of Manpower said in its latest jobs report.

Amid high costs and flagging sales, a growing number of companies are buckling under the pressure. About 42,000 businesses were shut down in the first six months of this year, compared with 49,000 over the whole of last year.

The ongoing slump is the result of a confluence of short-term cyclical headwinds, as well as longer-term structural issues. The Sunday Times looks at four key contributors to slowing growth in Singapore.

The world economy has yet to completely shake off the vestiges of the global financial crisis and continues to lack a strong growth driver.

This is the result of an "absence of a meaningful rebound in consumer confidence globally, which is weighing on investment and hiring decisions", says CIMB Private Bank economist Song Seng Wun.

"Singapore is caught in that crossfire," he adds, noting that the Republic's key trading partners have all been grappling with their own sets of challenges.

In China, for instance, the economy appears to have stabilised and fears that a "hard landing" might drag Asia deeper into a slowdown this year have proved overblown.

But growth in the country - which by some measures is already the world's largest economy - has slowed significantly in recent years. Singapore's non-oil domestic exports to China - its largest trading partner - fell for the 15th straight month in September.

There are more speed bumps ahead, especially on the geopolitical front.

The upcoming United States elections could dent year-end festive demand, especially if the result is "divisive", says Mr Song. "That could weigh on consumption because of poor confidence."

But they have almost halved since, plunging the oil and gas industry into a crippling slump.

Companies in Singapore have not been spared the effects of this protracted downturn. More than two years of tumbling oil prices have wiped over US$24 billion (S$33.5 billion) from the market value of Keppel, Sembcorp Marine and other listed oil-services companies - or about two-thirds of their pre-July 2014 capitalisation.

Tens of thousands of jobs have been axed and some companies have defaulted on bond payments - sparking concerns over banks' exposure to the sector.

Most recently, Sembcorp Marine said it is freezing salaries and cutting about 8,000 jobs - comprising employees and sub-contractors' manpower - to tackle the severe downturn.

The company reported a net loss of $21.8 million for the three months to Sept 30, from a net profit of $32.1 million in the same period a year ago.

The company also said 3,080 workers were also laid off in the quarter ended Sept 30 - 660 here and 2,420 in Keppel Offshore & Marine's (Keppel O&M's) overseas yards. This brought the total job cuts for the first nine months of the year to about 8,000 or 26 per cent of Keppel O&M's workforce, and more cuts are expected.

Despite these difficulties, the sector remains an important one for Singapore in the long run, says Mr Song. "There eventually will be a cyclical upturn, it's just a question of when, and whether companies have the stability to ride through this current phase."

Meanwhile, the drag from the sector will "feed through to the rest of the economy", he adds.

The collapse of South Korea's Hanjin Shipping in August starkly illustrates the challenges facing the shipping industry in the face of overcapacity amid a global trade slump.

International trade has fallen to its lowest level since 2009, alongside lacklustre economic growth.

But some economists say the slowdown is not merely cyclical, and lower levels of global trade might become the new normal.

This is because growth in developed economies like the United States is increasingly driven by services rather than the trade in goods.

China is also becoming less exposed to international trade as it shifts away from an industrial-led growth model towards consumption and services.

This means Chinese companies are increasingly sourcing from within the country, instead of importing.

This trend could weigh on regional trade even in the long run - a gloomy prospect for Singapore, which depends not just on its own exports but which also does a bustling trade in re-exports.

Technology has transformed almost every industry - from food delivery to manufacturing. These developments have left both challenges and opportunities in their wake, most obviously in the labour market.

There are thousands of jobs waiting to be filled in growing sectors like IT, precision engineering, education and healthcare. But many workers who have been laid off lack the necessary specialised skills required in these roles.

In its latest macroeconomic review, the Monetary Authority of Singapore said a combination of slow economic growth and these increasing skill mismatches is weighing on the labour market.

Professionals, managers, executives and technicians (PMETs) - whose jobs are often more susceptible to business-cycle downturns - have been the hardest hit .

They accounted for more than two-thirds of the resident population let go in the first half of this year - more than their share of the total workforce.

Only about four in 10 PMETs who lost their jobs in the first quarter managed to find a job by June, even though more than half the job openings in the first half of the year were targeted at their skill level.

There is no easy solution to this - the ever-increasing pace of technological change means that jobs will more or less be in a constant state of flux.

There is help available for laid-off workers - including the option to upgrade their skills with SkillsFuture, or programmes which help mid-career workers move to industries with the potential to grow.

But companies and workers also have a part to play - both in terms of skills upgrading and shifting mindsets.

For now, all eyes are on the Committee on the Future Economy's report due out next January, which will map out a blueprint for Singapore's economic future.

"Singapore is slightly more well positioned (than others in the region) because we have the fiscal ammunition to cushion the economic fallout," says OCBC economist Selena Ling.