The decision to raise interest rates for the first time this year is a positive sign for the US economy but will have a mixed impact on Singapore and Asia.

On the one hand, it signals the US Federal Reserve's confidence in the economy's recovery, which could help lift global growth. However, the move will also push up borrowing costs in Singapore and the region at a time when economic growth is already lacklustre. It is also fanning fears of further capital outflows from the region, which could fuel heightened market volatility in the coming year.

The Fed raised the benchmark federal funds rate - the rate banks charge each other for overnight loans - on Wednesday for the first time in 2016 by a quarter of a percentage point, citing an improving US economy and labour market.

The rate hike, widely expected for months, was just the second since the 2008 global financial crisis and is expected to ripple through the economy, nudging up rates on credit cards, mortgages, vehicle loans and bank savings accounts.

The Fed said it expects to raise rates three times next year, instead of two as projected before the presidential election. 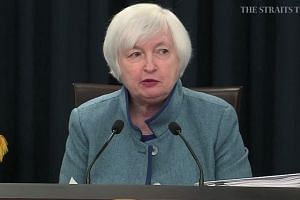 Fed sees faster pace of rate hikes in 2017: What it means for Singapore consumers and businesses

This comes on the back of stronger US economic data, as well as campaign promises made by US President-elect Donald Trump to ramp up government spending, which is expected to increase inflation in the United States.

Market watchers have been expecting the Fed to hike interest rates more aggressively next year to keep prices under control.

The latest rate hike indicates that the US economy is on the road to recovery - a positive development for Asia, including Singapore, if this stronger growth translates into more demand for the region's exports.

The US was Singapore's third- largest trading partner last year, with total bilateral trade of over $75 billion. But higher rates will also push up borrowing costs for households and companies here.

The three-month Sibor, or Singapore interbank offered rate - which is used to price home loans - spiked further in the wake of the Fed's interest rate announcement and has risen to 0.93209 per cent. This is up 6.7 per cent from Nov 11, and the highest since July.

The Sibor is typically highly correlated with US interest rates.

In addition, higher US interest rates also raise the prospect of capital outflows from emerging markets in the region.

This is because higher rates prompt investors to move money out of emerging markets into US dollar-denominated assets, putting pressure on Asian currencies and asset markets.

Past announcements from the Fed, related to tapering in 2013 and the interest rate increase last year, have indeed affected capital flows to and from emerging markets, with some experiencing sharp exchange rate depreciations, a research note from Moody's noted.

While Brazil, India and Indonesia experienced sharp currency depreciations in 2013, this year it was Malaysia, Mexico and Turkey that saw their exchange rates fall significantly.

All in all, the latest rate hike points to more belt-tightening in the coming year for Asian businesses and consumers.

A version of this article appeared in the print edition of The Straits Times on December 16, 2016, with the headline 'US rate hike points to more belt-tightening ahead for Asia'. Subscribe
Topics:
More
Whatsapp Linkedin FB Messenger Telegram Reddit WeChat Pinterest Print Purchase Article Copy permalink