WASHINGTON (BLOOMBERG) - Two-thirds of business economists in the US expect a recession to begin by the end of 2020, while a plurality of respondents say trade policy is the greatest risk to the expansion, according to a new survey.

Forty-one per cent said the biggest downside risk was trade policy, followed by 18 per cent of respondents citing higher interest rates and the same share saying it would be a substantial stock-market decline or volatility.

The expansion that in May became the second-longest on record still looks resilient, with no major warning signs flashing and Fed officials upgrading their growth outlook for this year and next. Should it endure, the US expansion would in mid-2019 become the nation's longest ever, based on National Bureau of Economic Research figures that go back to the 1850s.

Trade fears aside, economists were slightly more optimistic about the economy this year. The median forecast for inflation-adjusted gross domestic product growth rose to 2.9 per cent from a 2.8 per cent pace projected in the June survey. The 2019 estimate remained at 2.7 per cent.

On the brighter side, 33 per cent of respondents said the biggest potential driver of a stronger economic performance is corporate tax reform, 27 per cent cited stronger wage gains and 10 per cent said stronger global growth. 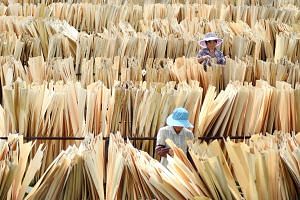 Meantime, Fed policy makers said "risks to the economic outlook appear roughly balanced" in their statement last week, while raising their 2018 growth estimate to 3.1 per cent from 2.8 per cent in prior forecasts and 2019 to 2.5 per cent from 2.4 per cent. They also boosted the main interest rate by a quarter-point to a target range of 2 per cent to 2.25 per cent, this year's third hike.

Respondents in NABE's survey indicated they expect the Fed to raise interest rates once more this year and three times in 2019, consistent with projections from central bankers. The poll's median estimate for the target range midpoint at year-end rose to 2.375 per cent, equivalent to one more 25-basis-point hike this year, from 2.21 per cent seen in the earlier survey.

Yelena Shulyatyeva, an economist at Bloomberg Economics in New York, was among those who conducted the analysis of survey responses.