WASHINGTON (AFP)- US President Donald Trump threw cold water on the chances of reaching a deal on trade with China, just as a delegation from Beijing was in Washington for talks on Thursday (May 17).

"I tend to doubt it," Trump said about the chances for talks to be successful. "China has become very spoiled... Because they always got 100 per cent of whatever they wanted from the United States."

The comments came shortly before Trump was due to meet with China's top trade negotiator Liu He as talks resume to keep frictions between the economic powers from becoming a trade war.

Trump unleashed a barrage of criticism against former US administrations for allowing Beijing to take advantage of the United States.

"We have been ripped off by China. And an evacuation of wealth like no country has ever seen before given to another country that's rebuilt itself based on a lot of the money that they've taken out of the United States," he said.

"Trade has been a total one way street," Trump said. "And I explained to (China's) President Xi (Jinping) that we can't do that anymore."

Trump also had harsh words for the European Union, which is likewise at loggerheads with Washington over US export tariffs on steel and aluminum. 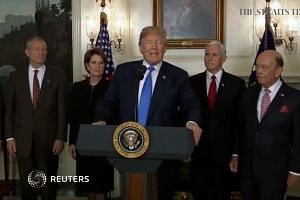 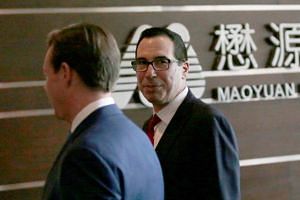 China's Vice-Premier Liu leads the trade delegation from Beijing that was to hold meetings Thursday and Friday with a US team led by Treasury Secretary Steven Mnuchin.

The US has threatened to impose 25 per cent punitive duties on up to US$150 billion in Chinese goods while China has targeted US$50 billion in American exports.

US Commerce Secretary Wilbur Ross and US Trade Representative Robert Lighthizer also will participate in the talks, which the White House said are focused on "rebalancing" trade relations and which also center on US complaints over how China treats American intellectual property.

In Beijing, the Commerce Ministry said China hoped the two sides could resolve the trade frictions during the talks.

TROUBLES ON THE TRUMP TEAM

"But of course we've prepared a response for various possibilities," spokesman Gao Feng said at a press briefing on Thursday.

The talks, part of a busy week of US trade negotiations and tight deadlines in Washington, have become enmeshed in political intrigue after a Trump advisor considered a hardliner on China was left out.

Trump economic aide Peter Navarro, who was seen as having a more dominant role following the departure of White House economic advisor Gary Cohn over trade issues, was left off the list of participants, unlike the talks in Beijing two weeks ago.

According to press reports, Navarro sparred with Mnuchin over his handling of the China talks and was barred from attending the meetings this week, but Kudlow downplayed those reports.

Trump has also faced accusations of quid-pro-quo after vowing to soften punitive US sanctions on the Chinese telecoms equipment firm ZTE - an announcement which came after AFP reported a Chinese state firm would pour cash into a Trump-tied real estate venture in Indonesia.

Trump, however, has denied weakening the US stance toward ZTE, and repeated Thursday that he told Xi he would "take a look at that."

"But anything we do with ZTE is a small component of the overall deal."

As US officials also work to ease tensions with the European Union over the steep steel and aluminum tariffs, Trump also said the EU "has become very spoiled."

The EU has a temporary exemption from the tariffs but that waiver expires June 1.

Ross said he had been discussing the issue with his European counterpart, including the possibility of imposing import quotas on the trade bloc.

The administration also this week is trying to reach a deal with Canada and Mexico to revise the 24-year old North American Free Trade Agreement.

Canada's Prime Minister Justin Trudeau seemed hopeful, saying Thursday at deal was "on the table" with just a few more issues to be worked out.

House Speaker Paul Ryan, who previously said the deadline for getting a deal was Thursday in order for Congress to have time to debate and vote on the new pact, opened the possibility there may be more time.

"My guess is, there's probably some wiggle room...but not an indefinite amount," Ryan told reporters on Thursday.

The Nafta talks have been hung up on US demands to increase American content in cars that receive duty free treatment in the trade bloc, and to have a sunset provision, which would require the three governments to renew the treaty after five years.