The trade deal, which was struck in Atlanta yesterday after more than five years of negotiations, "embodies what Singapore sees as the future of the Asia-Pacific", said Mr Lim.

"The TPP has also been deliberately designed to be more inclusive, so that small and medium-sized enterprises can take full advantage of its benefits," he added. 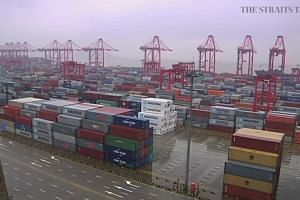 The agreement is expected to boost trade and investment flows between TPP countries as well as integrate the region into a single manufacturing base and market, the Ministry of Trade and Industry (MTI) said in a statement yesterday.

Singapore companies will benefit from increased market access with all 11 other TPP countries, which include some of the Republic's largest trading partners such as Malaysia, the United States, Japan, Australia and Vietnam. The ministry said the deal's updated trade rules will assure Singapore investors and traders of a more open, predictable and transparent environment, and also create more opportunities for Singapore-based companies.

The 12 TPP countries "will work intensively to tie up remaining details, and produce the final text for public review", MTI said.

"The countries will also each begin respective domestic approval processes, to bring the TPP into force as soon as possible."

The deal was also welcomed yesterday by Japanese Prime Minister Shinzo Abe, who said it would benefit both Japan and the Asia-Pacific region, reported Reuters.

"It is a major outcome not just for Japan, but also for the future of the Asia-Pacific," Mr Abe told reporters shortly after the deal was clinched.

While not part of the pact, South Korea's Trade Ministry said yesterday that it hopes to join the partnership as soon as possible.

"With the agreement being reached, South Korea will actively examine details of the new trade arrangement and analyse its impact on its own economy," Assistant Minister for Trade Negotiations Kim Hak Do was quoted as saying by Yonhap news agency.

South Korea already has existing free trade agreements with 10 out of the 12 countries involved in the TPP. Mr Kim said Seoul has been engaged in talks with all the TPP nations and they agreed that "it makes sense for it (Korea) to join". However, he noted that factors like pace of ratification and terms for later entrants will determine how soon South Korea can join the TPP.