SINGAPORE (BLOOMBERG) - Singapore's Minister for Trade and Industry Chan Chun Sing said the tightening in foreign worker rules announced in the Budget this week was a "surgical" move targeted at specific industries to make the labour market more sustainable.

The aim is "to make sure that the Singapore foreign manpower dependency is on a sustainable trajectory", Mr Chan said in an interview with Bloomberg Television's Haslinda Amin in Singapore. "We are not going to have an unlimited number of foreign workers in Singapore but what we have and what we want is a higher quality of foreign workers."

Finance Minister Heng Swee Keat said in his Budget speech on Monday (Feb 18) that quotas for foreign workers in services industries, such as food and retail, will be lowered from next year to help boost productivity and curb labour growth.

Mr Chan said Singapore would remain open to talent, particularly in industries such as artificial intelligence and financial technology, and is "playing for the long game" with this Budget. He said the government wanted to guide firms towards being more "manpower-lean" while reassuring them that this would reap longer-run benefits.

"I don't think we run our foreign workers policy on a feast-and-famine strategy," he said. "We want to have a smooth trajectory to allow our firms the ability to plan long-term."

He said the government will announce measures to help small businesses adjust to these new policies during post-Budget Parliament sessions.

Outside of moulding the domestic workforce, Mr Chan said Singapore is positioning itself to remain neutral and open to both the US and China amid mounting tensions between the world's two largest economies. 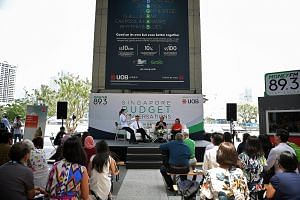 Budget 2019: Tighter foreign worker quota may be tough on some firms, say panellists

"Our role is to keep asking ourselves how we can value-add to China and the US at the same time," Mr Chan said. "We play in a space where we want to remain neutral, remain open so that this is a place where US, China, Europe can come, be engaged and conduct productive economic activities - and I think that's how we position ourselves."

That's part of a bigger pitch that the city state has been making to attract others that might follow Dyson Ltd, whose billionaire owner announced last month the company would shift its headquarters to Singapore from the UK. Mr Chan also flagged longer-term business and political certainty, "superior connectivity", and strong intellectual property laws as selling points for those foreign firms to relocate to Singapore.

More comments from the minister on global trade:

"Trade frictions - those are perhaps just at the surface. There are wider issues that have to do with the technology competition and, even wider than that, perhaps geo-strategic competition," he said of the US and China. "Results of the talks will very much depend on the domestic politics of both the US and China"

"This reminds me of the situation almost 100 years ago, just before the Great Depression at that point in time. It was the same fork in the road that we had to confront: Do we go for an open, rules-based system or do we go for more unilateral isolationist policies?"