A strong political centre is needed for countries and leaders to make "difficult and bold trade-offs" that ensure long-term gains, Minister for Trade and Industry Chan Chun Sing said yesterday.

But one cannot expect to have a public that will put the long-term interests of society ahead of their short-term ones if they do not see steady improvements in their own livelihoods, he added.

"We are at risk, and we can be in for a steep downward spiral... if we don't get both our economics and politics right," Mr Chan told the second Singapore-France Economic Forum held at the Lee Kuan Yew School of Public Policy.

The two-day forum discusses new horizons for the world economy and, in his opening speech, the minister stressed the need for countries to rethink the way they redistribute globalisation's benefits, rejuvenate industries and evolve the global trading system's rules.

"Inequality is important to fix, but immobility is even more important and harder to fix," said Mr Chan. "It is one thing to be poor at a moment in time. It is another to have no hope to be rich forever in the future, and that may be a deeper reason to the discontent around the world."

In addressing this problem, he said, leaders must have both political will and means to invest in training its people and reorganising the education system to help all keep pace with a fast-changing economic environment.

This sets the foundation for a strong political centre, translating to support for leaders who focus on the long term, Mr Chan added. 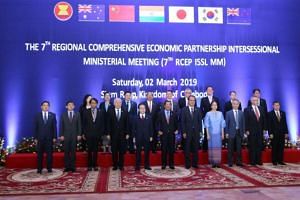 Enabling Singaporeans to excel amid competition

He noted in the same speech that a fracturing middle class, seen in various countries, harms the political centre, and this is worsened by factors such as populist leaders who promise quick fixes to problems.

Apart from redistributing the fruits of globalisation via lifelong education and continuous training, countries have to rejuvenate their industries as well, said Mr Chan.

This means accepting the need to re-engineer production and supply chains so as to integrate with global shifts, and creating new opportunities with fresh technologies, connectivity and business models rather than sheltering old industries from change.

Leaders need to evolve the global trading system as well, he added, and this includes new rules for the new digital economy.

Mr Chan was not the only speaker to flag pushback from those displaced by disruption as an issue to address, or the political nature of globalisation's problems.

In his speech, former French minister of economy and finance Michel Sapin said globalisation is not just an economic or scientific crisis, but a political one.

Ms Claire Waysand of Le Cercle des economistes (the French economic society) added: "Globalisation has enabled a lot of catching up in the world economy and has lifted people around the world out of poverty.

"At the same time, it has sometimes produced increasing inequality within countries, and that creates tensions and backlash."

It is, however, not always easy to compensate those who have lost out from globalisation, she said.