Singapore's retail sales snapped a 24-month-long year-on-year slide in February, thanks to Chinese New Year spending and the low base effect of pandemic-hit 2020.

Retail sales grew 5.2 per cent year on year, a reversal of the 6.1 per cent fall recorded in January.

Excluding motor vehicles, retail sales increased 7.7 per cent in February compared with the 8.4 per cent decline the month before.

The Department of Statistics said yesterday that this improvement in retail sales was mainly associated with celebrations for CNY, which fell in February this year, whereas the festival was celebrated in January last year.

But comparing the performance for the January-to-February festivities period, retail sales declined 1.2 per cent this year.

The rebound in retail sales signifies partial normalisation, with the Singapore economy further reopening as the vaccination roll-out is ramped up, said OCBC Bank's head of treasury research and strategy Selena Ling. She expects sales to recover by 12 per cent to 13 per cent this year.

"Given the very low base during the circuit breaker period last year, retail sales could see very buoyant on-year prints.

"The recovery pace in the local retail sector would really depend on accelerated vaccine roll-out, potential reopening of some travel bubbles and borders, and the return of some leisure and visitors from meetings, incentives, conferences and exhibitions."

"More steps to ease social distancing measures, with more employees allowed to return to the workplace, and caps eased for events such as live performances and wedding receptions will provide an extra boost to the retail and the food and beverage services sectors," they said.

Most retail industries saw year-on-year improvements in February, thanks to festive spending.

Sales of watches and jewellery jumped 34.1 per cent, while apparel and footwear retailers also saw higher takings of 31.6 per cent. Recreational goods recorded higher sales of 13.9 per cent.

Supermarkets and hypermarkets continued their growth streak, with a rise of 13.6 per cent.

Computer and telecommunications equipment sales increased 12.8 per cent, while takings by furniture and household equipment sellers rose 11.4 per cent.

However, sales of cosmetics, toiletries and medical goods fell 18.7 per cent. Sales of optical goods and books also dropped, by 10.9 per cent. Motor vehicle sales fell 9.1 per cent, and takings by department stores continued to slide, by 2.3 per cent.

The festive period also boosted sales of F&B services, which fell at a more gradual 3.5 per cent in February year on year. Restaurants saw a rise in sales of 8.5 per cent, and fast-food outlets also recorded higher takings of 2.1 per cent. 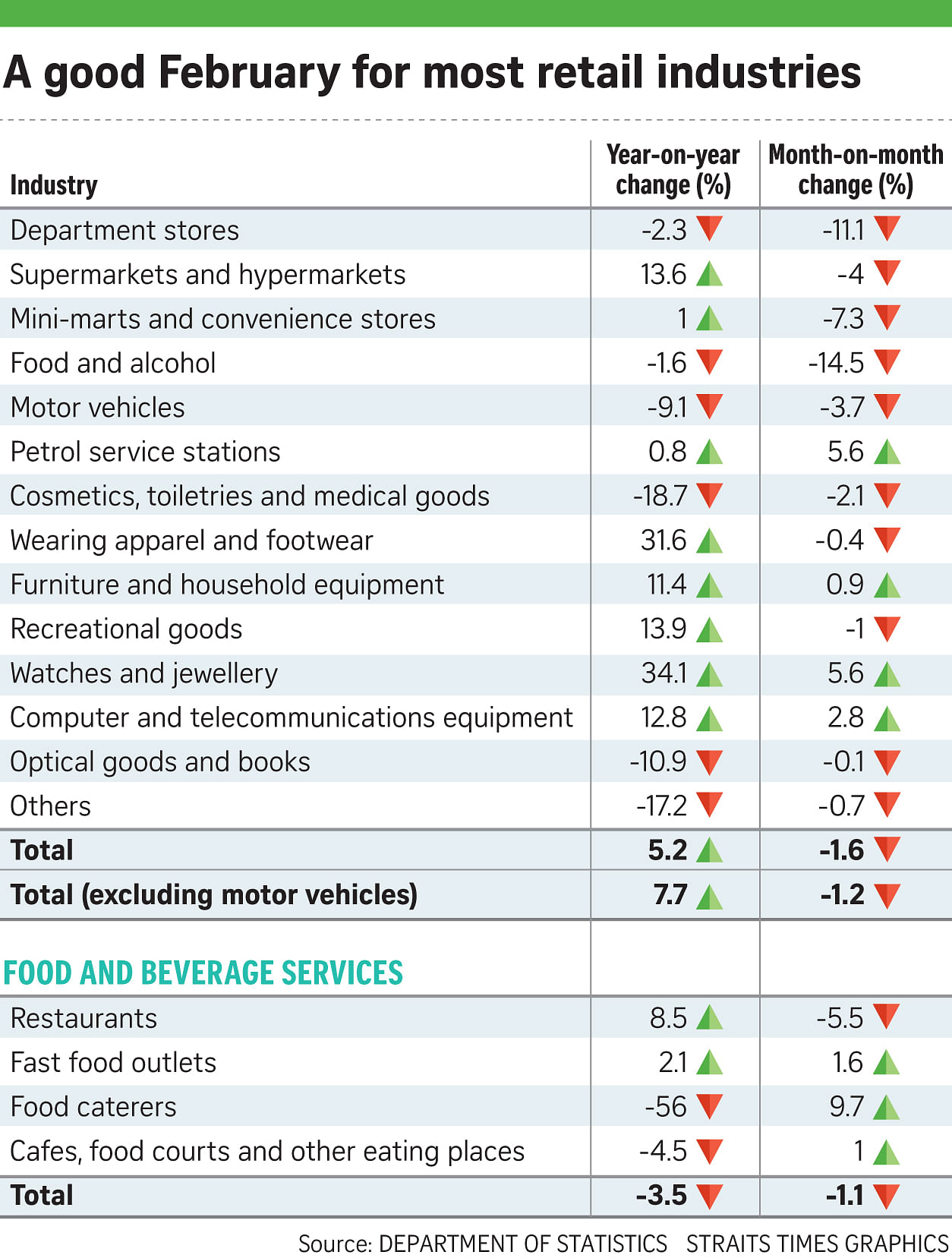 But food caterers saw a 56 per cent drop in sales, while cafes, food courts and other eating places saw sales dip by 4.5 per cent.

The total sales value of F&B services in February was estimated at $699 million. Online F&B sales made up about 22.2 per cent.

National University of Singapore Business School associate professor Chu Junhong noted: "Once consumers form an online shopping habit, they may continue it, even as government restrictions are eased.

"But we will expect to see higher growth in offline shopping."

A good February for most retail industries