Manufacturing growth fell again in May to log its first contraction in more than 21/2 years, as trade tensions between the United States and China intensified last month.

In an extension of a growth slowdown since early last year, Singapore's Purchasing Managers' Index (PMI), a key barometer of activity in the manufacturing industry, slipped 0.4 point to 49.9 last month from April - dipping below 50 for the first time since August 2016.

A reading above 50 indicates that the manufacturing economy is expanding, while one below 50 shows a general decline. The electronics sector PMI saw its seventh consecutive month of contraction, dipping 0.1 point to 49.4.

ING chief economist Robert Carnell saw two factors behind the decline, one being the US-China trade war, which is damaging growth prospects in China and, by extension, Chinese demand for manufactured goods made in Singapore.

The other, he said, is the global slump in technology demand and the associated technology war between the US and China.

Looking ahead, CMC Markets analyst Margaret Yang expects new orders and exports to remain weak in the months to come, as additional tariffs by the US and China kicked in around the end of last month to early this month.

Last month, the US more than doubled tariffs on US$200 billion (S$274 billion) worth of Chinese goods, prompting Chinese retaliatory tariffs on US$60 billion worth of US products. 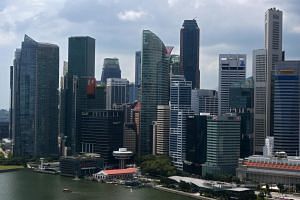 Singapore CEOs still bullish on their firms' growth prospects - not so much on global economy: KPMG poll

"Anecdotal evidence suggests that manufacturers are increasingly concerned about the escalation of trade tensions between the world's two largest economies," said the Singapore Institute of Purchasing and Materials Management, which compiles the PMI index by surveying around 150 industrial firms.

It added that the weak reading overall was due to slower growth recorded in new orders, new exports, factory output, inventory and the employment level.

The order backlog index continued to contract for the eighth consecutive month as well.

For electronics, the latest figure was attributed to weaker readings in new orders, new exports and the employment level as well.

She added that with the tariffs, higher import and input prices are "likely to inhibit profit margins, and higher prices will eventually be transferred to end users".

But Mr Carnell noted that the Singapore PMI fell less than that for Malaysia, which was down 0.6 point to 48.8, and South Korea, which fell 1.8 points to 48.4.

China's Caixin PMI for May remained unchanged at 50.2.

UOB senior economist Alvin Liew said the outlook for manufacturing is expected to worsen further if US tariffs are imposed on the remaining US$300 billion worth of Chinese exports to the US after the Group of 20 Summit late this month. Morgan Stanley said a global recession could begin in nine months if these tariffs were imposed. Mr Carnell added: "The environment can remain very weak, at least until there is some thawing in the trade war."

He added that while US President Donald Trump is hard to predict, he will likely have to consider the impact of the trade war on his chances of re-election, mainly if the stock market takes a hit.

"With the election race maybe not kicking off in earnest until early next year, this leaves plenty of room for negativity in the meantime," he said.

While the global technology slump comes with an added complication that replacement electronics are being postponed until the roll-out of 5G technology, he said this could be a "real game changer" for the industry, the Asian region and technology hubs like Singapore when it happens.