A positive result in April proved to be a false dawn for struggling manufacturers, with output slumping last month as factories scrambled to contain the fallout from the trade war.

The increasingly bitter dispute between China and the US is upending supply chains across the region and playing havoc with local manufacturers, especially those in the electronics cluster.

Overall output declined 2.4 per cent last month compared with May last year - a bigger contraction than the 1.8 per cent fall forecast by analysts in a Bloomberg poll.

It was also a bitter pill after the 0.1 per cent rise in April but not as bad as the 4 per cent fall in March, which had been the sector's first contraction in more than a year.

If the volatile biomedical manufacturing were excluded, the decline last month would have been a steeper 4.9 per cent.

The main culprit was the key electronics sector, where production dived 10.8 per cent compared with May last year, according to Economic Development Board data yesterday.

Observers put the poor showing down to the trade war. SIM Global Education senior lecturer Tan Khay Boon said the tariff dispute shows no sign of abating "and the effect has changed from a negative sentiment to an actual decline in manufacturing demand".

Maybank Kim Eng economists Chua Hak Bin and Lee Ju Ye said they expect the manufacturing sector to remain in contraction this month, adding: "Disruptions to the supply chain will likely intensify as the trade war broadens to tech and the US imposes export controls on more Chinese tech firms."

Dr Tan noted that Singapore manufacturers are part of the global supply chain for electronics components. 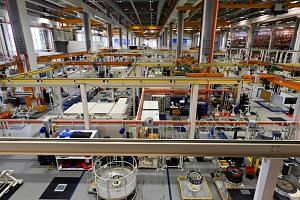 Singapore should stay alert but not be afraid amid global economic uncertainty: Chan Chun Sing

Singapore factory output defies forecast of another drop with 0.1% uptick in April

Last month's decline was led by electronics, which makes up over a quarter of the whole manufacturing sector. Electronics output contracted by 10.8 per cent year on year, with semiconductors, computer peripherals and data storage posting falls.

Mr Albert Loh, chief executive of electronics manufacturer PTS Technologies, said the situation is "challenging" as his US customers are becoming more cautious, though he is benefiting from one customer's decision to move assembly of some products to Singapore from China in order to avoid levies.

"I've been trying to leverage our exposure by focusing more on Internet of Things sensor technology," he added.

By contrast, biomed production grew 8.8 per cent last month, with pharmaceuticals output up 15.9 per cent, while medical technology fell 6.8 per cent due to lower export demand for medical devices.

The precision engineering cluster's output dipped 4.7 per cent last month. Chemicals output also slipped, down 0.4 per cent, mainly due to the 9.5 per cent decline in petrochemicals production that was mainly a result of maintenance shutdowns in some plants.

Transport engineering output advanced 2.9 per cent. The aerospace segment was up 17.2 per cent on the back of more repair and maintenance jobs from commercial airlines.

But lower levels of offshore and shipbuilding and repairing activities sent production in the marine and offshore engineering segment down 10.9 per cent.

General manufacturing output was up 4.9 per cent, led by the food, beverages and tobacco segment, which posted growth of 9.3 per cent due to more beverage products being produced.

A version of this article appeared in the print edition of The Straits Times on June 27, 2019, with the headline 'S'pore factory output down 2.4% in May, worse than forecast'. Subscribe
Topics:
More
Whatsapp Linkedin FB Messenger Telegram Reddit WeChat Pinterest Print Purchase Article Copy permalink