SEOUL (REUTERS) - South Korea's exports contracted at their steepest pace in nearly three years in February as demand from its major market China cooled further in yet another sign of faltering momentum in Asia's fourth-largest economy.

Overseas sales dropped 11.1 per cent in annual terms, the sharpest decline since April 2016 and marked the third month of falling shipments. A Reuters survey had predicted a 10.8 per cent decline for February.

"China-bound sales are tumbling especially as memory chip prices are falling. Looking ahead, export growth should remain weak in March but shrinking of exports should bottom out March or April as demand from China recovers on stimulus measures," said Park Sang-hyun, chief economist at Seoul-based HI Investment & Securities.

The deepening export slump comes at a time of slowing global growth as the Sino-US trade conflict disrupts world supply chains in a blow to business investment and corporate profits.

Imports shrank by 12.6 per cent in February from a year earlier, also worse than a 11.6 per cent fall predicted in the survey. This resulted in a trade surplus of $3.1 billion, more than double the amount in January as imports dropped at a faster rate, according to the Korea Customs Service.

Though trade negotiations between Washington and Beijing appear to be making some progress, export-driven Asian countries including South Korea, Japan and Taiwan are reeling from the ripple effect of the months-long trade war.

As South Korea's exports got off to a shaky start this year with inflation showing no signs of reviving, the central bank on Thursday left the base rate unchanged at 1.75 per cent. 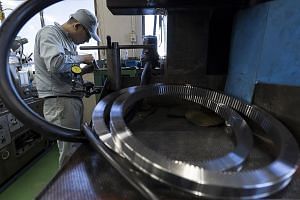 While most analysts don't expect the central bank to cut rates anytime soon, policymakers have indicated they will keep an accommodative stance and be ready to respond if economic conditions deteriorate markedly.

South Korea's economy, like many of its export-reliant peers globally, has stuttered in the past few quarters amid slowing world demand.

Exports to China, which buys nearly 30 per cent of South Korean goods, have been on the decline since late last year and could worsen if growth in the world's second-biggest economy slows sharply.

Shipments to China shrank for the fourth straight month in February with a 17.4 per cent year-on-year slide, as sales of all key items including petrochemical goods, memory chips, displays to steel products declined, a government statement showed.

While the Lunar New Year holiday weighed on China-bound exports, the bigger drivers for the slump are the Sino-U.S. trade war and slowing Chinese growth, Park at HI Investment & Securities said.

Overall, South Korean exports of memory chips plummeted 25 per cent in February on-year, while sales of petrochemical products and displays suffered 14.3 per cent and 11 per cent declines, respectively.

South Korean markets are closed on Friday for a national holiday.