The shock contraction reinforced financial market views that the central bank is likely to make a U-turn on policy, shifting to an easing stance and possibly cutting interest rates to counter declining business confidence and growing external risks.

A worse-than-expected downturn in the memory chips sector hit first quarter capital investment, while slumping exports amid the US-China trade dispute erased gains from private consumption, the Bank of Korea said on Thursday.

Gross domestic product (GDP) in the first quarter declined a seasonally adjusted 0.3 per cent from the previous quarter, the worst contraction since a 3.3 per cent drop in late 2008 and sliding from one per cent growth in Oct-Dec, the Bank of Korea said on Thursday (April 25).

None of the economists surveyed in a Reuters poll had expected growth to contract. The median forecast was for a rise of 0.3 per cent.

"Government spending failed to keep up the bumper boost of the fourth quarter, especially for construction investment, while a drop in business investment was worse than expected due to a downturn in the chips sector," a BOK official said, adding there was also a strong base effect after solid fourth-quarter growth. 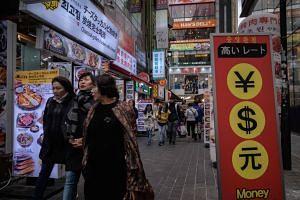 Exports fell 2.6 per cent quarter-on-quarter, a sharper drop than the 1.5 per cent decline in the previous three months.

Private consumption gained by 0.1 per cent due to a rise in demands for durable goods.

From a year earlier, Asia's fourth-largest economy grew 1.8 per cent in the January-March quarter, compared with 2.5 per cent growth in the poll and 3.1 per cent in the final quarter of 2018.