People already feeling impact as economy shrinks in Q3, and there will be more speed bumps ahead

The economy has had an on-again, off-again flirtation with technical recession since the start of this year.

The term applies when output falls for two straight quarters - something Singapore has managed to avoid - but that is likely cold comfort for workers already laid off, or firms that have shut down or cut back investment and hiring.

In other words, technical recession or not, it has already been clear for some time that the economy is in for a protracted slowdown and people are already feeling the impact.

The economy shrank 2 per cent in the July to September quarter compared with the preceding three months.

If output contracts again in this quarter, Singapore will enter a technical recession. 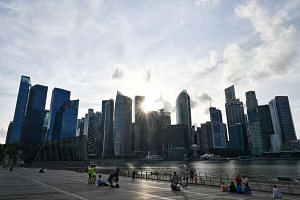 Singapore economy stays in slow lane, with more bumps ahead 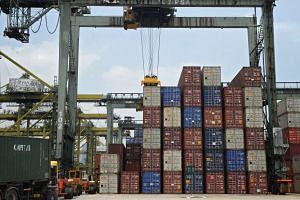 Service exports set to be bigger part of economic pie

The Ministry of Trade and Industry (MTI) said yesterday that government forecasters expect the economy to avoid a technical recession this year.

Private sector economists largely agree, but warn that economic momentum is likely to remain grindingly slow even if an outright recession does not show up in the numbers.

United Overseas Bank economist Francis Tan noted that the MTI's latest Economic Survey of Singapore showed that private consumption grew just 0.6 per cent in the third quarter over a year ago

"Faced with poorer economic prospects... weaker consumer confidence has resulted in a collective 'tightening your belt' situation among residents," he noted.

More worryingly, fixed capital formation - which refers to business investment - has been sliding. It declined 2.7 per cent in the July to September quarter over a year ago, after ticking up just 0.1 per cent in the preceding three months.

This "tells us that businesses have also been a lot more cautious about spending money for the future", Mr Tan said.

"We hope that this does not start a vicious circle where lower investments today result in lower potential economic growth in (future).

"But should external demand remain weak and significant government intervention (does not materialise), this could well be the case."

Cracks have been showing in the labour market for some time. Total employment fell in the third quarter - the second time this has happened since the 2009 global financial crisis.

Layoffs - which include retrenchments and aborted contracts - fell slightly in the third quarter to 4,100, down from 4,800 in the preceding quarter.

And amid high costs and flagging sales, a growing number of firms are buckling under the pressure. About 21,880 businesses shut in the first six months of the year compared with 49,000 over all of last year.

Labour chief Chan Chun Sing even came out to assure workers last week that the Government will do more to help if needed.

Beyond short-run economic cycles, there are also longer-term worries that may further hit sentiment.

A rising tide of populism and anti-globalisation in the United States and Europe could spell bad news for world trade and, by extension, Singapore's small, open economy.

"The Singapore economy continues to decelerate alongside weakening global trade, and we see downside risks on the horizon stemming from policy uncertainty in the US and European Union," said HSBC economist Joseph Incalcaterra.

Ultimately, quarterly economic figures can be volatile - one quarter of contraction hardly tells the full story, and more data releases in the coming weeks will help paint a clearer picture of the outlook.

But while Singapore is not in a full-blown recession, there will be more speed bumps ahead.

Correction note: In an earlier version of the story, we said that about 42,000 businesses shut in the first six months of the year. It should be 21,880. We are sorry for the error.

A version of this article appeared in the print edition of The Straits Times on November 25, 2016, with the headline 'Slowdown has already taken a toll on workers and businesses'. Subscribe
Topics:
More
Whatsapp Linkedin FB Messenger Telegram Reddit WeChat Pinterest Print Purchase Article Copy permalink