Manufacturing suffered one of its worst runs last year, and few expect the sector to be a major engine for growth this year.

Manufacturing, which makes up a fifth of the Singapore economy, shrank about 5 per cent last year over levels the year before - it was the main drag on growth. Weak external demand has been a major factor, since most factory output is produced for export.

Developed markets such as the United States are recovering gradually, but this has not translated into a lift for regional exports, said Mr Song.

"We have seen that not just in Singapore but also in China, Thailand, Japan and other Asian economies, where exports are also floundering," he said.

It is unclear when the recovery in developed markets will trickle down to factories here, he added.

Another factor is low oil prices, which have reined in utility costs for some firms but hit the bottom lines of those in the offshore and marine segment, said HSBC economist Joseph Incalcaterra.

He said this could offset structural increases in other areas such as biopharmaceutical output. 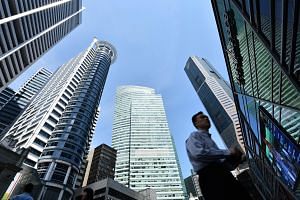 Singapore is a key global hub for manufacturing oil and gas equipment - it is the largest maker of jack-up rigs, commanding 70 per cent of the world market.

"I've pencilled in a modest improvement for manufacturing this year, but I'm not holding my breath... I see no near-term light at the end of the tunnel," she said.

For instance, firms in China - Singapore's largest trading partner - are increasingly sourcing inputs from within the country.

Thus, China is no longer importing as much from the rest of Asia - a trend that has dampened regional trade, said Mr Ng.

Likewise, US growth has been powered largely by domestic consumption, not imports from Asia.

Also, many Asian factories have been holding on to inventories amid lacklustre demand, and these need to be sold before new production can begin, said Barclays economist Leong Wai Ho.

"It is a corrective cycle, complicated by the start of an interest rate hiking cycle," he noted.

All these factors point to a slow year ahead for Singapore and the rest of Asia, especially since growth in China is likely to continue moderating.

"Low oil and commodity prices will provide some support, but not enough to offset the drag from weaker external demand," added Mr Leong.