SINGAPORE - Singapore's non-oil domestic exports (NODX) in December rose 9.4 per cent year on year, following on from the strong 11.5 per cent expansion in November.

Analysts polled by both Reuters and Bloomberg had expected shipments to rise 5.8 per cent from a year earlier.

On a 3-month moving average, year on year basis, December NODX posted the first positive change (+2.3 per cent), following declines for most of 2016, International Enterprise (IE) Singapore noted in its report on Tuesday (Jan 17).

On a month-on-month and seasonally adjusted basis, NODX increased by 1 per cent in December 2016, following November's 13 per cent growth. Shipments reached S$14.0 billion in December, higher than the S$13.9 billion in November.

NODX to the majority of Singapore's top 10 markets rose in December, except for the US, Japan, the European Union and Malaysia. The largest contributors to the increase in NODX were China, Taiwan and Hong Kong.

Notably, sales to China - Singapore's biggest market - jumped by 33.5 per cent year on year in December, following the previous month's increase of 15.8 per cent. 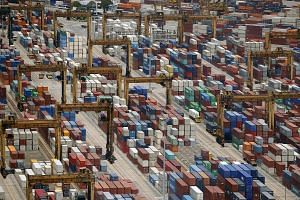 "Global demand has picked up, which is helping electronics production," analysts at Moody's Analytics said in a note before the figures were released, adding that conditions were improving for Singapore's exporters.

There are worries though over whether the export recovery can be sustained. US President-elect Trump, who campaigned on a protectionist policy stance, is seen as a further risk to trade-dependent Singapore, analysts have said.

"A lot of it hinges on Trump when he details his policies when he enters office on 20th January that could actually derail this green shoot," ANZ economist Weiwen Ng told Reuters earlier.