SINGAPORE - Singapore companies are well ahead of those in other countries in installing smart building initiatives for their workspaces, and also show more awareness of digitalisation, cloud computing and the Internet of Things (IoT), according to a study by London-headquartered office software firm Condeco.

Such progress might be thanks to the city-state's Smart Nation programme launched in 2017, as Singapore leads a number of indicators for office technology, Condeco said.

About two-thirds of the respondents were C-suite executives, including chief technology officers and "workspace managers" (a combination of facilities, real estate, office and front-of-house managers). The remaining one-third were senior executives.

This has also brought a knock-on effect on Singapore firms' use of other technologies in the workspace, for example using apps to book meeting rooms, cloud computing and IoT, Condeco said.

"It's only been two years since Singapore launched its Smart Nation initiative, but it really looks like it is paying dividends," said Mr Peter Otto, chief product officer at Condeco. 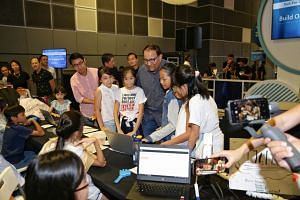 Assistive technologies for children with disabilities highlighted at SG:Digital Wonderland 2019

Compared with last year's survey, Singapore businesses have seen a 17 per cent increase in the use of mobile apps to book meeting rooms this year.

Singapore respondents were also more likely than the global average to expect cloud computing, IoT and Big Data to be important over the next 12 months.

Digital transformation is the biggest challenge in the next 12 months for business leaders around the world, with 37 per cent of global respondents saying so.

This is followed by the adoption of new technology, with 35 per cent of respondents finding it a challenge.

Across all countries surveyed, access to talent supply (26 per cent) as well as regulation and compliance (24 per cent) are considered greater organisational challenges than business uncertainty (22 per cent).

Singapore also tops the flexi-time rankings, with 66 per cent of business leaders saying that their companies offered it, whereas US companies are least likely to offer it (49 per cent).

Remote working is prevalent in Australia (45 per cent), but least common in Germany (35 per cent).