SINGAPORE - Singapore's external trade data remained weak in the third quarter, with non-oil domestic exports (Nodx) contracting for a fourth consecutive quarter in the period of July to September this year.

Amid the gloomy figures, Enterprise Singapore slashed its 2019 Nodx forecast to -10 per cent to -9.5 per cent on Thursday (Nov 21), a further cut to the lowered -9 per cent to -8 per cent range previously.

The agency expects Nodx to pick up in 2020, with growth in the range of 0 to 2 per cent on the back of a gradual recovery in electronics. But economists said this remains a pessimistic outlook.

OCBC bank’s head of treasury research and strategy Selena Ling said this does not suggest recovery in shipments, given the low base of comparison from this year’s poor performance.

But she added that there remains room for higher growth, with the possibility of Nodx coming in at 2 per cent to 4 per cent year-on-year “if there is no further escalation of US-China trade tensions in the form of fresh tariffs or tariff hikes”.

Ms Emily Liew, director of planning, research and statistics at ESG said at a press conference that while Singapore is still feeling the effects of the trade war, the hope is for exports performance to improve with a gradual pick-up in electronics.  Electronics Nodx formed over 40 per cent of the overall decline in each quarter this year.

CIMB private banking economist Song Seng Wun said he is hopeful the data in the next two months will be better given the low base of comparison last year as well.

He added that there are signs of stability on demand, especially on the tech front, with an uptick in chip equipment sales in the United States.

Enterprise Singapore noted that while the International Monetary Fund expects global growth to pick up modestly to 3.4 per cent in 2020, "downside risks such as trade tensions, no-deal Brexit withdrawal and deterioration in financial market sentiments could impact economic growth".

"Overall, lower oil prices amid weak global demand is also expected to further weigh on our oil trade in nominal terms and in turn total trade in 2019 and 2020," said the agency.

While the growth outlook ahead remains clouded as well, with stabilisation rather than a sharp pick-up expected in most Asean markets, the fall in Nodx eased from a double-digit drop in the third quarter and analysts believe that the electronics downcycle is now past its worst.

Nodx fell 9.6 per cent from a year ago in the third quarter, up from a revised 14.7 per cent drop in the quarter before.

The figure was dragged by a contraction in electronic shipments, by 25 per cent, following a 27 per cent fall in the second quarter. Integrated circuits, personal computers and disk media products contributed the most to the decrease this time.

Shipments of non-electronic products fell 3.9 per cent over the year in the third quarter, after a 10.6 per cent decrease in the second quarter. The largest contributors were pharmaceuticals, petrochemicals and primary chemicals.

Nodx to all top markets, except China, declined in the third quarter, with the biggest contributors being Japan, Hong Kong and Malaysia. 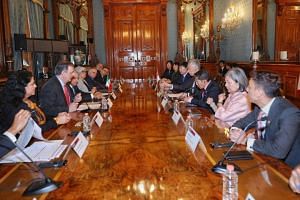 Permanent Secretary for Trade and Industry Gabriel Lim said in a press conference on Thursday that the Ministry of Trade and Industry expects growth to pick up “modestly” in 2020, with the manufacturing sector returning to positive growth.

This will be led by “a gradual recovery in the electronics and precision engineering clusters”, and will support growth in related sectors such as wholesale trade.

But the performance of the manufacturing sector and trade-related services such as wholesale trade is expected to remain subdued in view of the ongoing downswing in the global electronics cycle, he said.

Sectors such as construction, information and communications, finance and insurance, among others, should continue to post steady growth, he said.

Mr Kelvin Wong, assistant managing director of planning at the Economic Development Board added that the electronics sector is likely to see a gradual pick-up with a normalisation of inventory and boost from 5G technology in telecommunications equipment and smartphones.

Nodx grew 3 per cent quarter-on-quarter, after a 5.1 per cent drop.