SINGAPORE (BLOOMBERG) - Singapore Inc is stirring, with companies from real estate to engineering becoming bolder in their hunt for acquisitions abroad.

Companies in the city-state announced around US$91 billion (S$125.7 billion) of overseas deals this year through September, more than double the US$41.9 billion of transactions for the same period of 2017, data compiled by Bloomberg show. Temasek Holdings and GIC still loom large, but increasingly others are inking their biggest-ever transactions to put Singapore on the world stage.

The flurry of activity shows a new determination by firms to adopt a more aggressive stance amid an escalating trade war between China - one of Singapore's closest neighbors - and the US. An economy that's forecast to expand next year at the slowest pace since 2016 is also putting pressure on companies to look further afield for growth.

"We're certainly seeing a desire among Singapore Inc companies to globalise," said David Biller, Citigroup Inc's head of Southeast Asia corporate and investment banking. "Many of the next-generation leadership teams in these organizations are helmed by executives with multinational experience and they bring a focus on cross-border growth."

Citigroup is advising Singapore Technologies Engineering Ltd on a US$630 million deal - the company's biggest - to buy an aircraft engine components group from General Electric Co. CapitaLand is in the process of acquiring a portfolio of multifamily properties in the US for US$835 million in what is its largest overseas transaction since 2010, while Singapore Press Holdings (SPH), owner of The Straits Times newspaper, last month purchased some student accommodation in the UK for S$321 million, its biggest foray abroad.

It's not only the total value of deals that's increasing. Singapore firms were involved in 468 transactions as buyer of foreign companies this year through September, an increase of 7.8 per cent from the same period of 2017. Globally, M&A activity rose 2 per cent.

"Achieving organic growth in a relatively small market like Singapore is difficult, and building capabilities and scale will be increasingly important for corporates to stay relevant globally," said Pankaj Goel, the co-head of South-east Asia investment banking and capital markets at Credit Suisse Group. 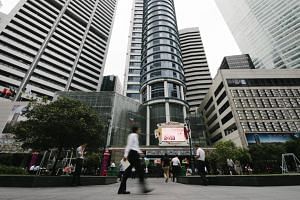 China, and the expansion opportunities it presents, is proving a strong lure, according to Oriano Lizza, a sales trader at CMC Markets Plc.

"Many Chinese companies have too much leverage and are selling off assets to strengthen their balance sheet," Mr Lizza said. "Being familiar with the region, Singapore companies are coming in and many do cut-price offers."

Firms from Singapore have been involved in 68 acquisitions of Chinese companies so far this year. The volume of transactions jumped from US$3.8 billion the same period of 2017 to US$19.5 billion, Bloomberg-compiled data show.

By far the biggest investment in a Chinese company that involved a Singapore one was the US$14 billion capital injection in Jack Ma's Ant Financial. The financing, announced in June, included a US dollar tranche part-backed by Temasek and GIC.

Temasek's other major transaction was its 3 billion-euro (S$4.76 billion) injection to help Bayer AG finance its planned takeover of US competitor Monsanto Co. GIC was also involved in Blackstone Group's acquisition of a majority stake in Thomson Reuters Corp's financial and risk unit.

"The Singapore government has been encouraging companies for years to expand abroad to develop the country's profile," said CMC's Lizza. "GIC and Temasek have been at the forefront of it."

"Of course, over many years, some of these companies have grown organically into regional and global businesses, and in cases, acquisitions have naturally followed," he said.

With the driving force behind overseas acquisitions showing no sign of letting up, Singapore Inc will continue its offshore push, according to JPMorgan Chase & Co.'s head of M&A for Southeast Asia, Tay Ee Ching.

Firms are looking to acquire "new technologies, new sources of growth," she said. "The trend should continue as they become more experienced in competing for assets abroad."