SINGAPORE - The Singapore economy expanded 3.1 per cent in the last three months of 2017, lifted once again by robust manufacturing growth.

This was higher than economist expectations of 2.6 per cent growth but moderated from the 5.4 per cent expansion in the preceding quarter, according to the Ministry of Trade and Industry's (MTI) advance estimates out on Tuesday (Jan 2).

The latest numbers come after Prime Minister Lee Hsien Loong said in his New Year message on Sunday that the economy expanded 3.5 per cent for the whole of 2017 - more than double initial forecasts.

This was thanks to an upswing in global growth, Mr Lee added.

Here are some comments from economists on the latest data.

"Overall, we continue to see manufacturing growth tapering off, but still remaining a smaller support. At the same time, construction is likely to bottom out, as the property market recovers. The longer trend of Singapore relying more on services growth is likely to resume starting from 2018, with external oriented services sectors growing at a faster pace than domestic oriented ones (business, other services)."

"As we just step into a brand new year of 2018, we are certainly more optimistic on the Singapore economy than anytime during the 2015 to 2016 period. However, we should also remain cautious on some of the risk factors that could be potential headwinds for our economic growth.

As identified by the MTI, the slowdown in China's investment is a big risk. Moreover, the current high US equity valuations and the higher interest rates in the US from the continuation of the interest rate normalisation may result in negative wealth effects should there be a sharp pullback in the asset markets.

Another potential risk could arise from the domestic administration. During the PAP convention on Nov 19, Prime Minister Lee Hsien Loong highlighted that government's expenditure is expected to rise rapidly in the coming years (reiterating Finance Minister Heng Swee Keat's speech in Budget 2017). With that, there seems to be talks of higher taxation in the form of a tax hike in the Goods & Services tax. The consumption tax hike could be seen as timely by the government as the economy is growing better and expected wage growth could be higher in 2018.

We think that it is probable that the GST could be hiked to 8 per cent (from the current 7 per cent) as of April 1. However, that could result in a dampening effect on 2018 economic growth and generate higher inflation.

With all the potential headwinds in place, be it external or domestic, we remain cautious with our outlook for Singapore's 2018 GDP growth and reiterate our forecast of 2.5 per cent growth." 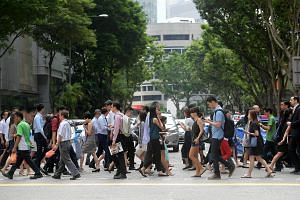 "We expect strength in the US and EU economies to offset the moderate slowdown we expect from China domestic demand and also electronics production this year.

The recently passed US tax reform package should also boost business investment spending, which should be supportive for Asian and Singapore export growth this year given the strong historical relationship between US investment spending and regional exports.

We also expect domestic demand to improve. Private consumption will likely accelerate further in the coming months, driven by an improving labour market, the lagged impact of strong export performance and strength in the property market, notwithstanding any potential tax hikes in the pipeline."