MUMBAI • India's rupee yesterday slid the most since December as the government scrapped the special status for the troubled Jammu and Kashmir state, heightening political uncertainty amid a sell-off in the region's currencies.

The yield on the benchmark 10-year bond rose five basis points to 6.4 per cent, reversing some of last week's losses.

India revoked the special status of Jammu and Kashmir, a move that risks deepening the deteriorating security situation in the disputed region at a time when escalating global trade tension is battering markets across Asia.

China's yuan fell past 7 per dollar for the first time since 2008 amid speculation that Beijing was allowing its currency to weaken to counter United States President Donald Trump's latest tariff threat.

"The worries over the political situation in Kashmir and the yuan depreciation are weighing on the currency," said Mr Paresh Nayar, currency and money markets head at FirstRand in Mumbai.

The government scrapped Article 370 of the Constitution that gave the state of Jammu and Kashmir complete autonomy and freedom to draft its own laws except in the areas of foreign affairs, communications and defence. The government also proposed to split the state into two federal territories.

In the lead-up to yesterday's order, prominent political leaders in Indian-administered Kashmir were placed under house arrest and the army deployed thousands of extra troops across the valley in one of the most widespread security crackdowns in recent years. 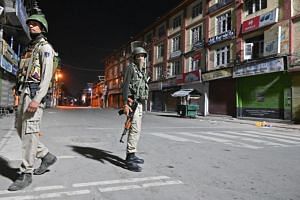 Pakistan Prime Minister Imran Khan warned in a tweet on Sunday that India's "new aggressive actions" had "the potential to blow up into a regional crisis". Traders also said there was likely dollar selling by state-run banks to stem the rupee's losses.

The rupee had gained for a second successive month in July as investors found India's debt assets attractive amid a growing pile of negative-yielding debt globally. The currency also benefited from a fiscally prudent budget and the government's decision to sell debt offshore.

"The market has been short on dollars and we saw positions beginning to flip late Friday," said Mr Anindya Banerjee, a currency strategist at Kotak Securities. "A break of 70.50 may see 71.50 being the next level."