The slowing manufacturing sector hit its lowest point in two years last month amid a general downturn across the region.

The key Purchasing Managers' Index (PMI) - a much-watched indicator of industrial activity - dipped 0.4 point to 50.7 from December to last month.

This was its lowest reading since December 2016, when it was 50.6, and it was the fifth consecutive month of decline.

Although the 50.7 reading shows that the overall manufacturing sector is still expanding, there are distinct signs of weakness.

This is most notable in the key electronics segment. It contracted for a third straight month, with its PMI sub-index slipping 0.2 point to 49.6, according to the Singapore Institute of Purchasing and Materials Management (SIPMM), which compiles the data.

"Exports are already contracting, and the PMI suggests that manufacturing production could contract for the first half of this year," Maybank Kim Eng economist Chua Hak Bin told The Straits Times.

"Some kind of a trade deal between the United States and China is key to the outlook and to recovery. Barring some kind of compromise, I think manufacturing could be in for a prolonged recession, which may threaten to spread to the services side as well."

Around the region, China's factory activity contracted by the most in almost three years last month, and Taiwan posted its weakest readings since September 2015.

South Korea's PMI hit the joint-lowest since November 2016 and Indonesia logged its first contraction in a year, while Japan's factory activity was the slowest in 29 months. 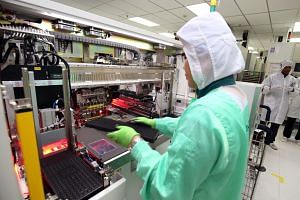 The weak PMI readings reinforce expectations that central banks in Asia will put on hold any further interest rate hikes. There is talk of possible rate cuts in countries such as China, Australia and India.

"Slower growth in overall manufacturing PMI and the sustained contraction pace in the electronics PMI are signs of a moderating economic growth in Singapore," said UOB economist Barnabas Gan, noting that overall manufacturing growth here of 7.5 per cent last year was relatively high compared with the average growth of 2.7 per cent from 2013 to 2017.

Dr Chua added that the electronics sector is more cyclical than others such as pharmaceuticals, making it a good barometer of where global demand is headed.

"Collapsing global electronics demand seems to be a warning sign," Dr Chua said. "Even if there is a tariff ceasefire, the US-China war on technology will probably continue, although it may take the form of other barriers, including export controls or foreign direct investment restrictions, which could still hurt the demand for tech goods."