TOKYO (REUTERS) - Japan's household spending fell for the fifth straight month in June but real wages rose at their fastest pace in more than 21 years thanks to higher summer bonuses, which could provide some support for consumer prices.

Household income also marked the fastest gain in three years on gains in temporary workers' pay, offering some hope for Bank of Japan policymakers struggling to accelerate inflation to their elusive 2 per cent target.

The figures come ahead of Friday's release of second-quarter gross domestic product (GDP) data, which will likely show the economy expanded an annualised 1.4 per cent after contracting in the previous quarter.

Household spending fell 1.2 per cent in June from a year earlier, government data showed on Tuesday (Aug 7), marking the fifth straight month of declines. But the fall was smaller than market forecasts of a 1.6 per cent slide and a 3.9 per cent drop in May.

"Household spending continued to fall but we're seeing some positive signs," said a government official who briefed reporters on the data, adding that spending may turn up in July as households spend their bonuses handed out at the end of June.

Households' inflation-adjusted income rose 4.4 per cent in June, the biggest increase since July 2015, as a tightening job market pushed up temporary workers' pay, the data showed.

Separate data showed workers' real wages rose 2.8 per cent in June from a year earlier, accelerating from a 1.3 per cent increase in May and marking the fastest pace of growth since January 1997. 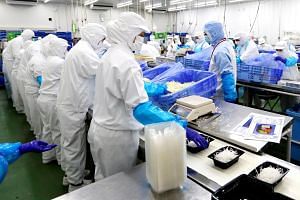 Private consumption has been a soft spot in the economy as slow wage growth prevents households from loosening their purse strings, in turn discouraging companies from hiking prices and keeping inflation far from the BOJ's 2 per cent target.

Signs of rising wages would be encouraging for the BOJ, which trimmed its inflation forecasts last week and blamed Japan's entrenched deflationary mindset for keeping price growth subdued.