Both benchmarks surged more than 5 per cent earlier in the session.

China and the United States agreed during a weekend meeting in Argentina of the Group of 20 leading economies not to impose additional trade tariffs for at least 90 days while they hold talks to resolve existing disputes.

The trade war between the world's two biggest economies has weighed heavily on global trade and sparked concerns of an economic slowdown.

Crude oil has not been included in the list of products facing import tariffs, but traders said the positive sentiment was supporting crude markets.

"Initial signs of the US-China trade relation on the mend have provided a boost to oil prices in today's trading session. Nevertheless, whether the momentum will sustain hinges on tangible outcomes from the negotiations," said Abhishek Kumar, senior energy analyst at Interfax Energy in London. 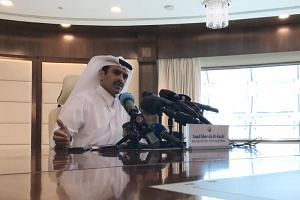 Oil also received support from an announcement by Alberta that the Western Canadian province will force producers to cut output by 8.7 per cent, or 325,000 barrels per day (bpd), to deal with a pipeline bottleneck that has led to crude building up in storage.

The Organization of the Petroleum Exporting Countries meets on Thursday to decide output. The group, along with non-Opec member Russia, is expected to announce cuts aimed at reining in a glut that has pulled down crude prices by around a third since October.

"We feel that a decline of about 1.1-1.2 million barrels per day will be required if fresh price lows are to be precluded," Jim Ritterbusch, president of Ritterbusch and Associates, said in a note.

Within Opec, Qatar said it will leave the producer club in January. Qatar's oil production is only around 600,000 bpd, but it is the world's biggest exporter of liquefied natural gas (LNG).

Qatar's decision to quit Opec shows the frustration of small producers at the dominant role of a Saudi and Russia-led panel, Iran's Opec governor Hossein Kazempour Ardebili told Reuters, adding that any supply cuts should come only from countries that had increased output.

Outside Opec, Russian oil output stood at 11.37 million bpd in November, down from a post-Soviet record of 11.41 million bpd it reached in October, Energy Ministry data showed on Sunday.

Russian President Vladimir Putin said on Saturday he had no concrete figures on possible oil output cuts, though his country would continue its contribution to reducing global production.

Meanwhile, oil producers in the United States continue to churn out record amounts of oil, with crude output at about 11.5 million bpd.