NEW YORK (REUTERS) - Oil prices tumbled more than 6 per cent on Tuesday (Nov 20) in heavy trading volume, with US crude diving to its lowest level in more than a year, caught in a broader Wall Street selloff fed by mounting concerns about a slowdown in global economic growth.

More than 946,000 front-month WTI contracts changed hands, exceeding the daily average over the last 10 months and the second-highest daily volume since June, according to Refinitiv data.

Oil's slide has been largely unimpeded since early October when WTI prices were near four-year peaks. Since then, WTI has fallen more than 30 per cent.

"For the time being it's more about risk," said Jim Ritterbusch, president of Ritterbusch and Associates.

"When the stock market comes off 8 or 9 per cent, it tends to conjure up images of a weak global economy and that feeds into expectations of weaker-than-expected oil demand."

The S&P 500 index on Tuesday hit a three-week low as weak results and forecasts from big retailers fanned worries about holiday season sales, while tech stocks slid further on concerns about iPhone sales. 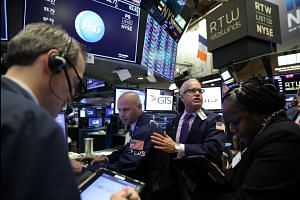 Macro-focused funds and commodity trading advisory (CTA) firms have pulled back positions in recent weeks as the selloff has accelerated, market participants said.

According to Credit Suisse, prior to oil's selloff in early October, macro/discretionary funds and CTAs held a net long position that ranked in the top decile over the past five years. As of Monday, those funds were balanced between long and short positions as traders sold long positions and funds shifted to the sidelines.

"This is a risk aversion trade," said Mark Connors, global head of portfolio and risk advisory at Credit Suisse.

Prices ticked lower after US President Donald Trump said the United States intends to remain a "steadfast partner" of Saudi Arabia even though "it could very well be" that Saudi Crown Prince Mohammed bin Salman had knowledge of the killing of journalist Jamal Khashoggi last month in Turkey.

"I never really understood the premium behind some kind of friction between US and Saudi Arabia from a policy standpoint ... It really is a too-big-to-fail relationship," said Joe McMonigle, senior energy policy analyst at Hedgeye Risk Management in Washington.

US crude production has soared almost 25 per cent this year, to a record 11.7 million barrels per day (bpd).

The Organization of the Petroleum Exporting Countries is pushing for a supply cut of 1 million bpd to 1.4 million bpd when it meets on Dec. 6.

The Opec envoy for the United Arab Emirates said it was very likely that the group would reduce output but the exact level had yet to be decided.

The International Energy Agency (IEA) warned Opec and other producers of the "negative implications" of supply cuts, with many analysts fearing a spike in crude prices could erode consumption.

"We are entering an unprecedented period of uncertainty in oil markets," IEA Executive Director Fatih Birol said on Tuesday.