Industry road map aims to inject $22.2b in value-add by 2020, help manufacturers grow

A new road map for the electronics manufacturing sector aims to create $22.2 billion in value-add and 2,100 jobs for professionals, managers, executives and technicians (PMETs) by 2020.

This comes amid a global push towards advanced manufacturing - also known as Industry 4.0 - with manufacturers ramping up investments in automation and new technologies to build "smart factories", where man and machine work together seamlessly.

The electronics industry has been, and will continue to be, a key sector of growth for Singapore's economy, said Mr Iswaran. Electronics manufacturing accounted for 4.4 per cent of the economy last year, with $90 billion in manufacturing output and employment of about 70,000.

Creating 2,100 new PMET jobs in electronics is "no mean feat", especially as the sector's existing base of workers is already relatively large, Mr Iswaran noted. 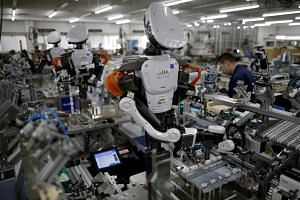 Electronics manufacturing "is not necessarily creating as many jobs as in the past, but... (it is) creating better-quality jobs".

The ITM aims to help firms in the sector prepare to take advantage of emerging opportunities in segments such as autonomous vehicles, artificial intelligence and healthcare.

"Even the smart factories of the future will need more sensors and robots," the minister said. While Singapore looks to continue attracting investments in high value-add activities, the existing base of electronics manufacturers will also need to transform.

"We aim to upgrade all of our manufacturing plants in Singapore to be best-in-class compared to their global operations," Mr Iswaran said.

Advanced manufacturing is also set to create new skilled jobs in manufacturing, such as system engineers and automation technicians.

This means skills development is also key to gearing the electronics industry up for long-term growth, said Mr Iswaran.

He announced the launch of the Skills Framework for electronics, which identifies emerging skills and competencies for the sector in the areas of robotics and automation, artificial intelligence and data analytics.

Mr Alexander Everke, chief executive of sensor manufacturer ams, said the company is on track to grow more than 40 per cent globally over the next three years.

The company is the anchor tenant at JTC nanoSpace@Tampines, and expects to invest about $200 million over the next three years in its facility there. This is in addition to "multiple hundreds of millions" the company has already pumped into its existing Ang Mo Kio and Woodlands facilities, Mr Everke said.

It had fewer than 1,000 employees here last year, and has since expanded significantly to have more than 6,000 staff.

"A big growth driver is the communications segment, which includes mobile phone customers, but we are also strong and fast- growing in automotives, autonomous driving and the Internet of Things, among others," he said.