The Singapore centre will also establish a China-Asean panel of arbitrators in promoting people-to-people exchanges.

BAIAC is set up by the Beihai Arbitration Commission (BAC), which is headquartered in Beihai, Guanxi province in China.

"Singapore's position as an international dispute resolution hub is trusted to serve the region for disputes arising from the Belt and Road Initiative, Asian trade cooperation, and investments between Chinese and Asean parties," the commission said in a media statement on Wednesday.

Professor Steve Ngo has been appointed to serve as the centre's founding president. Prof Ngo is a Singaporean arbitration practitioner with wide experience in China, India, Indonesia and the wider South-east Asian region.

Vice-chairman of the BAC, Zhu Jifan, said on Wednesday: "As part of the BAC's continuous expansion into Asean, it has chosen Singapore as its first port of call because of Singapore's position as the legal and financial hub of South-east Asia." 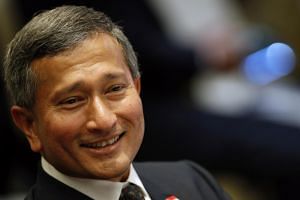 "Asia by and large is a price- and cultural-sensitive region where we need to start considering the needs of arbitration users, specifically small and medium-sized enterprises (SMEs)," he added.

BAIAC's arbitration rules, which are based on the 2013 United Nations Commission on International Trade Law (UNCITRAL) rules, will be modified to include a small claims procedure for faster and more economical disposal of small-value disputes.

The Singapore centre's fees will also be pegged at a "more reasonable" lower level to encourage more disputes to be arbitrated with efficacy, the commission said.

Within China, the BAC has set up hearing centres in 29 cities including Beijing, Shanghai and Guangzhou, to provide domestic arbitration services. The commission recorded over 47,000 cases in China during the first half of 2019.

Separately in the dispute resolution space, 46 nations signed the Singapore Convention on Mediation on Wednesday. The international mediation treaty, named after Singapore, will provide for the enforcement of mediated settlement agreements across countries.

Currently, mediated settlement agreements - which are the result of mediation negotiations between at least two commercial parties in a dispute - cannot be enforced across country borders.

Mediation involves a neutral party working with the different sides to come to an agreement, and is a less adversarial alternative to litigation and arbitration.