SINGAPORE - Discrepancies are rife in employment applications in Singapore, at the highest rate in the Asia-Pacific region, according to a study by global background-screening firm First Advantage.

Almost a third (30 per cent) of job applications analysed in the city-state last year were found to have discrepancies.

Most of these discrepancies were uncovered in candidates' work history - which included employment dates, positions held, key responsibilities, remuneration and reasons for leaving - as well as in their educational background.

Also, more than a fifth (22 per cent) of the discrepancies in Singapore were financial-related misrepresentations, in terms of the individuals' negative financial records regarding bankruptcy, credit, financial regulatory and anti-money laundering.

As a major financial hub, Singapore employers' highest priority in candidate screening was in financial-related checks - such as civil litigation, bankruptcy and credit checks, First Advantage said. These accounted for some 36 per cent of all screenings in the country in 2018.

Aside from Singapore, three other economies were also hotbeds for candidate discrepancies. Hong Kong follows closely in second place in the region with a 26 per cent discrepancy rate, while the Philippines comes next at 24 per cent, and Malaysia had a 20 per cent rate.

South Korea had the lowest rate in Asia-Pacific, at 5 per cent. 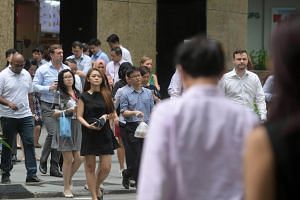 Half of S'pore's fresh entrants to workforce want jobs outside fields of study: Poll

In terms of the volume of background screening requests, First Advantage said that companies most often request such checks in May each year.