SINGAPORE - The majority of small and medium-sized enterprises in Singapore expect flatlining or falling revenue this year amid a lacklustre global economy, according to a new survey.

However, there is still scope for optimism. The survey by DP Information Group also showed companies are increasingly using automation and information technology to raise productivity.

The annual SME Development Survey released yesterday found 47 per cent of respondents do not expect turnover growth this year, up from 40 per cent last year.

Six per cent of those polled in this year's survey expect to see sales decline, similar to the 7 per cent in last year's poll. 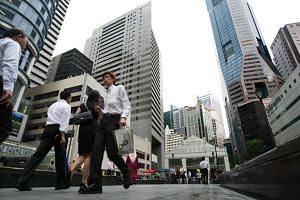 The findings are "not surprising" and show that while the position of SMEs is not improving significantly, it is also not deteriorating sharply, Singapore Business Federation (SBF) chief executive Ho Meng Kit told a media briefing yesterday.

"SMEs appear to be still treading water... The journey of economic restructuring (for many SMEs) is going to take a much longer time than anticipated."

He also noted a decline in the proportion of less established SMEs responding to the survey.

The three- to 10-year period is a critical one for SMEs, Mr Ho said. While it might merely indicate fewer such SMEs responded, it could also be a sign that firms are not surviving past this growth stage amid the challenging growth environment, he added.

Still, it is not all doom and gloom. DP Information's chief operating officer Lincoln Teo noted that 68 per cent of SMEs in the latest survey invested in technology and innovation, up from 64 per cent last year.

Firms have also moved beyond relooking their business models - a top strategy to raise productivity in last year's survey - and are now implementing changes, such as improving customer service and growing their market presence.

As part of its efforts to help SMEs grow, Mr Ho said SBF aims to help smaller firms get better access to government procurement contracts. "This will help them establish credibility, build a track record and create a brand name."