This is where ideas can develop and take off, and requires different skills: Ong Ye Kung

Singapore must become a place where new ideas can develop and eventually take off - much like what airport runways are to planes, Acting Education Minister (Higher Education and Skills) Ong Ye Kung said yesterday.

While the country has traditionally been a "control tower" - a key site for companies' regional and corporate headquarters - it now has to move on to the next step of being a "runway economy".

This means being a place where "ideas are conceived, business plans are developed, resources are put together and, from here, products and services can be launched to the region or to the world", he said in a speech at The Straits Times Future Economy Forum.

Mr Ong said this idea is one of the key areas of focus for the Committee on the Future Economy (CFE). It has been tasked with charting a blueprint for Singapore's economic future, and will release its report early next year.

To become a "runway economy", Singaporeans need a different set of skills, the minister added. "You're no longer just controlling, monitoring and managing things. You need skills that can actually make things happen. Skills that are practical and applied in nature." 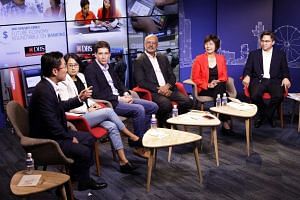 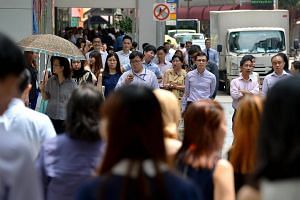 Many jobs on offer despite slowdown: Ong Ye Kung 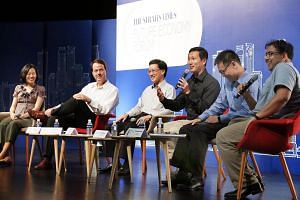 Ability to adapt will be key in future economy 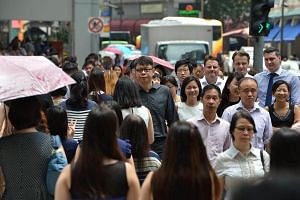 Job loss due to disruptive technology 'can create divisions'

"But if you have to make things happen, you have to be a bit more gung-ho, and have a stronger sense of adventure. Be prepared to take risks, be prepared to fail, but fail fast and fail small, learn quickly and restart again," he said.

Mr Ong was also part of a panel at the event, where he was asked about concerns over widening inequalities in the future economy.

He said the "runway" approach will help alleviate this.

"To benefit the top, we don't have to do anything... The whole point of having a CFE is to make sure that it (growth) is inclusive.

"Just doing research and development here is not enough. Companies have to conceptualise their business idea and make it take off here. Then a whole stream of activities take place, and many other people get to be involved," he added.

In his speech, Mr Ong said mastering skills and innovation are also vital elements of a "runway economy", and both are key areas of focus for the CFE too.

He said this is why UniSIM will be the sixth university, focusing on applied education and catering to adults, "so that we develop skills to power a runway economy".

The CFE is also beefing up efforts to build an ecosystem supportive of innovation - for instance, looking into issues related to commercialising intellectual property, and developing regulatory sandboxes to test-bed disruptive new ideas.

Regulators also have to play a coordination or leadership role in encouraging innovation, such as in mobile payment systems, he said.

Using government procurement to spur innovation is another idea being discussed. In many countries, a certain percentage of government budgets is set aside for buying innovative services and products, and buying from start-ups, and the CFE is exploring how this can be applied in Singapore, Mr Ong said.