Economists expect policy to be eased at next meeting in Oct, as well as other stimulus measures

Singapore's central bank has ruled out the possibility that it will change monetary policy outside of its usual schedule, even as the Republic yesterday downgraded its full-year growth forecast and second-quarter growth came to a near standstill.

Economists now expect the Monetary Authority of Singapore (MAS) to ease policy during its upcoming October review, and are looking to other stimulus measures to support poor-performing sectors amid heightened uncertainties ahead.

"We will be carefully monitoring developments and will take them into account in our assessment of the inflation and growth outlook for the Singapore economy at our next scheduled monetary policy review in the middle of October," he told a media briefing yesterday.

As of 5pm yesterday, the Singapore dollar weakened to 1.39 to the US dollar.

DBS senior economist Irvin Seah said: "With the latest set of poor data, chance is high that both monetary and fiscal policies will have to turn more accommodative." While he expects MAS to ease policy in October, he added that a counter-cyclical fiscal stimulus package is unlikely in the near term, adding that the economy is not at risk of a full recession yet.

Ms Selena Ling, head of treasury research and strategy at OCBC bank, said that "monetary policy easing has become mainstream globally", with the US Federal Reserve making a recent rate cut and others such as the Reserve Bank of New Zealand cutting interest rates more than expected last week.

On top of that, she added that a targeted fiscal policy reform is likely on the cards. This could be aimed at smaller businesses and workers.

"Given that the current growth slowdown is concentrated mainly in manufacturing, especially electronics, and wholesale and retail trade, any fiscal assistance is unlikely to be broad-based at this juncture," she said.

Economists flagged concerns that a negative spillover from manufacturing could hit the service sector and labour market as well. 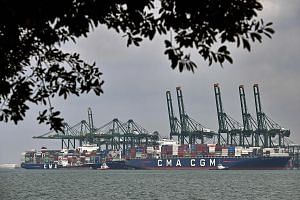 Maybank Kim Eng economists Chua Hak Bin and Lee Ju Ye expect labour market conditions to worsen in the second half as firms cut back on workers and hiring.

But Ms Ling noted that "any deterioration is likely to be gradual rather than knee-jerk", given an expected tightening of the quota of foreign workers that the service sector can hire come 2020.

Mr Terence Ho, divisional director of manpower planning and policy at the Ministry of Manpower, said the ministry expects "some upward pressure" on unemployment rates and retrenchment.

Union leaders and MPs are setting their sights on a longer-term uptick.

Mr Liang Eng Hwa, chairman of the Government Parliamentary Committee for Finance and Trade and Industry, said that fallout from the trade war is unavoidable given that the United States and China are among Singapore's biggest trading partners.

But he stressed that the Republic has a "sound strategy" in place for the medium to long term. This includes looking into new sectors such as agri-tech. Projects such as a $9 billion investment by the two integrated resorts, announced earlier this year, can also help stimulate the economy, he said.

Mr Tan Richard, general secretary of the United Workers of Electronics and Electrical Industries, said firms can use this period, where fewer orders are coming in, to review their business models and look into training their workers.