SINGAPORE - The Monetary Authority of Singapore (MAS) is keeping its exchange rate policy unchanged amid modest improvements in both economic growth and inflation.

While the outlook for the global economy has become more sanguine, Singapore's growth remains uneven as the pick-up has been limited largely to trade-related sectors, the central bank said in its biannual policy review released on Thursday (April 13).

Meanwhile, higher global oil prices have pushed up inflation here. However, the labour market remains weak and the economic environment is still lacklustre, which means companies are less likely to pass on higher costs to consumers.

This will dampen overall inflation, the MAS said.

The central bank uses the exchange rate as its main monetary policy tool to strike a balance between inflation from overseas and economic growth. The rate is allowed to float within a policy band that the MAS can adjust when it reviews monetary policy. 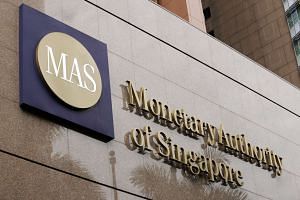 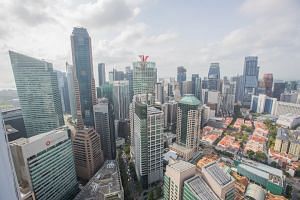 The Singdollar policy band is now on a path of zero appreciation against the currencies of key trading partners - a "neutral" policy stance put in place last April.

The central bank maintainced this policy stance at its last review in October.

The outlook for the world economy has improved since then, the MAS said, noting that global capital expenditure has begun to turn up amid some strengthening in business sentiment, while improving labour market conditions should sustain final demand in the developed economies. In addition, the outlook for China has stabilised on the back of firming corporate profitability and accommodative fiscal policy.

Against this external backdrop, activity in Singapore's trade-related sectors should support overall economic growth this year, lifted mainly by the semiconductor and precision engineering sectors which are experiencing a strong rebound.

However, the performance in the rest of the manufacturing sector will remain patchy.

The services sector - which makes up two-thirds of the economy - is also expected to expand at a slightly faster pace this year, led by a pickup in the financial sector and firm demand for ICT services.

While healthcare and education services will be underpinned by resilient demand, spending on discretionary retail items and other services is expected to be dampened by the still-subdued labour market and weak consumer sentiment.

The economy is forecast to grow by 1 to 3 per cent this year, not markedly different from the 2 per cent expansion in 2016, the MAS said.