Singapore manufacturers ended 2017 on a high, fuelled mainly by strong growth in electronics. But the sector's pace of expansion is showing signs of moderating after a year of breakneck growth.

The latest purchasing managers' index (PMI) - an early indicator of manufacturing activity - came in at 52.8 for last month.

This was down marginally from November's 52.9, which had been the highest reading since December 2009. A reading of 50 and above indicates expansion.

Last month was the 16th consecutive month of improvement in manufacturing, which makes up a fifth of the economy and is expected to remain a key growth driver this year.

The Singapore Institute of Purchasing and Materials Management, which compiles the PMI from a monthly poll of purchasing executives in about 150 industrial companies, said the latest reading "capped a year of strong growth for the manufacturing sector".

The electronics sector's PMI for last month came in at 53.2, its 17th month of growth, though dipping slightly from the preceding month's 53.5 reading.

The decline was attributed to a slower rate of growth in new domestic and export orders, new exports, factory output, inventory and employment. 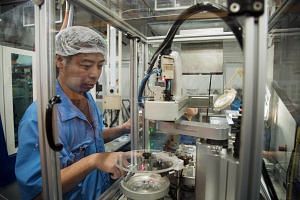 OCBC economist Selena Ling noted that the latest data is a modest easing from the November figures of 52.9 and 53.5, respectively, as both indexes remain in expansion territory.

"In particular, the electronics PMI figure remains near its current cycle high of 53.5 in September 2017 (highest since July 2010), which is encouraging that the key driver for the manufacturing sector is not rapidly losing altitude," she said.

"As seen from yesterday's fourth quarter GDP (gross domestic product) figures, manufacturing momentum had already softened from the third quarter. This brought the full-year manufacturing growth to 10.5 per cent in 2017, which is a sharp improvement from the 3.6 per cent seen in 2016, but we anticipate that the 2018 outlook for manufacturing growth will be a more modest single-digit growth of 4.9 per cent."

Going forward, she added, the manufacturing momentum may cool further as the regional manufacturing PMI figures are somewhat mixed.

While they improved last month for Taiwan, Vietnam, India and China, they had slipped for South Korea, Malaysia and Indonesia back into contraction territory.