SINGAPORE - The Republic's factory growth slowed again last month, marking a continuation of May's contraction, which was the first in more than 2½ years.

This may mean lacklustre economic prospects for Singapore for the rest of the year, said experts.

Singapore's Purchasing Managers' Index (PMI), a key barometer of activity in the manufacturing industry, slipped to 49.6 in June, down 0.3 point from the previous month.

A reading above 50 indicates the manufacturing economy is expanding, while one below 50 shows a general decline.

The electronics sector PMI shrank for an eighth consecutive quarter, coming in at 49.2, which is 0.2 point lower than the previous month.

The Singapore Institute of Purchasing and Materials Management (SIPMM) compiles the index by surveying around 150 industrial firms. 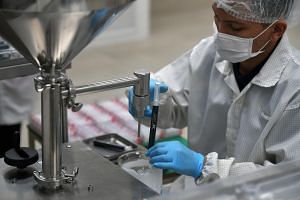 Singapore should stay alert but not be afraid amid global economic uncertainty: Chan Chun Sing

The weaker reading for manufacturing was due to first-time contractions in new orders, factory output, inventory and employment level, said SIPMM in a statement on Wednesday (July 3).

Maybank Kim Eng economist Chua Hak Bin told The Straits Times that PMI new orders are "leading indicators", and the contraction "suggests that the downturn will persist into the third quarter".

"Hopes for a second-half growth recovery are slowly being written off," he said. "The manufacturing recession is deepening, with the trade war broadening to tech."

Dr Chua added that Maybank Kim Eng's gross domestic product (GDP) growth forecast is at 1.3 per cent for the year, below the Government's current full-year GDP forecast of 1.5 per cent to 2.5 per cent.

Drags on the electronics PMI were in the contraction of new orders, new exports, factory output, inventory and employment level, with the electronics order backlog index contracting for 14 straight months.

Singapore's latest factory numbers come at a time when manufacturing activity worldwide has notably slowed due to the escalation in trade tensions.

"Globally, new export orders have been contracting for 10 months now," HSBC's co-head of Asian Economics Research Frederic Neumann and economics associate for Bangalore Abanti Bhaumik said in a report this week, pointing to contractions of the manufacturing sector in Asian economies such as China, Japan, South Korea, Malaysia and Taiwan.

Nonetheless, ING's chief economist and head of research, Asia-Pacific, Mr Robert Carnell, said Singapore is still doing better than the big electronics economies of Taiwan and South Korea, noting that the Republic's PMI decline since 2018 has been less pronounced than the other two economies.

He believes the roll-out of 5G - the fifth generation of cellular network technology - will be key to a much stronger global manufacturing outlook.